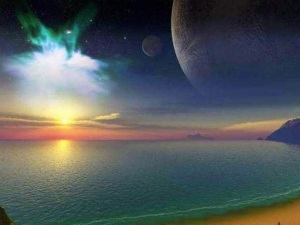 There was such quiet, I couldn’t understand when the movement began. I thought it was an earthquake. I thought it was the sound of my own blood boiling, my veins cracking like glass. It was none of these. It was my own heart, like slow applause. In less than a minute I’d descended so far into silence, I no longer recognized sound.

Of course I couldn’t tell Red, because he was insane. Or, to put it another way, happy. The experiment was such sincere agony to me, I hated him for finding peace in the pod.

Its walls rippled with foam and fiberglass, and some other fabric I didn’t recognise. It looked malleable. It was grey. Not like the sky after a storm, the way I heard Red describe it to his sister via RadioPhone yesterday, or last week, I don’t have much sense of time these days. It was the colour of mud. Stagnant, polluted mud that’s become poisonous in its own stillness.

All you have to do to become rotten or infected is stay still, Red explains to me. Stop doing the things you do to keep death out. Stillness is death, he says. I put it another way and say silence is death, and Red rolls his eyes and walks into the kitchen. He makes tea in our kettle that sounds like a screaming baby. He asks if I want some. I ignore him. He walks into his study and closes the door, alone with his numbered maps of the universe.

I should blame Arthur. On one of his visits, one of many evenings of wine and talk, or of whisky and backgammon, one of the nights I didn’t wander off when the two of them started talking about physics and the universe in that way I simply do not care about. It was Arthur who suggested we take part in the experiment.

They want couples, he said.

Why? I asked. Red looked at me sidelong, like I was stupid. But in those days I didn’t realise he found me idiotic. Now I know, but don’t care. Almost.

Rafael wants the data. Thinks the panel will like it. How couples react to sound deprivation.

Arthur, we are not a couple. Red had explained this to him before.

Doesn’t matter, they’re not looking for that kind of couple, necessarily. People who share living space are even better than real couples. How long have you two been jointly assigned? We looked at each other, trying to add up the years and months. There had been gaps; Red’s six months in New Japan and my year in Israel, and my disastrous two-month attempt to live with a bad ex-boyfriend who dumped me when my mother died, claiming to have enough problems of his own without my crisis. Red nearly moved out a few months after that to live with a pediatric nurse, but decided against it when he found her sucking off a nightclub bouncer at Hogmanay.

After he walks into his study, I unseal the front door, reseal it and put on my mask in the vestibule while the clock counts 90 seconds. I unseal the outer door and I’m at the base of the mountain where our city was installed after the Great Sorrow, with only 83 inhabitants. Their names are inscribed in the university walls. People are cycling in the late evening haze, carrying brown boxes of VitaDinner home in baskets.

I cycle around the mountain base, to the stone house which is nearly 9,000 years old. It isn’t much of a place; it looks like the stump of a dead molar. Our ancestors called it a croft. Why it’s survived the centuries when so little else has, I can’t imagine. Next to it are the infrared binoculars. I put in a token and look; after a few seconds I see past the edge of the galaxy, into a haze of dust. Then the dust breaks apart and I see Bliss.

Sound deprivation. Removal of noise. Red had talked about this project before, our university’s claim to fame and source of MultiGalaxy funding. He looked so serious with the white pads attached to his temples, thin wires trailing down his jaw, which was twitching less than usual under his habitual eleven days of beard. I used to rub it occasionally for fun, but had stopped at some point.

Bliss is shining. I can see a line of light curling around the Merciful Ocean, which must mean they’ve finished the new SuperHighway and cycling trail. I wonder if Martha and Fastidious have used it. I haven’t had much contact with them since they left. I heard they split up not long after they docked; Martha apparently fell in love with a gravity researcher and Fastidious moved to some mountain village in the rainy north. Fas sends more RadioMail than Martha. He says he doesn’t miss alcohol, which has no effect on Bliss. He describes the drugs there, things you puff and snort and inject just like our ancestors, but which are tested in a government lab and have no side effects apart from, according to Fas, a pale green mist in the morning. They had to develop something safe, that people could use to deal with the journey, the first six months of nausea and the silence.

One of the early problems with sticking people in the rockets and sending them to Bliss was the radiation. Then they figured out, after sending a monkey who I imagine will never forgive humankind despite the PlexiStatue we built of her, that the radiation is safe. But only on Bliss. The first attempt to bring migrants back to Earth ended in disaster when they dragged the radiation back with them. On Bliss it was neutralized with something in the atmosphere. Arthur explained at that deadly dinner party in the central compound during the quarterly health segregation, but I wasn’t listening carefully. I was watching a SuperBug tapping its multicoloured legs on the outer window.

On Earth, the radiation became lethal. The family who had insisted on the return journey, a former Icelandic Empire politician, her husband and sixteen children, died hideously within hours of landing, taking the entire Docking Station VI staff with them and destroying what was left of the vegetation in the former Mexican United States. Journeys are now strictly one-way, and they’ve clamped down on what you can take with you. Who knows what would be lethal on Bliss? According to the Galaxy Health Research Department, there were no allergies until a migrant landed with a small branch of vegetation concealed in his travel suit. They had to close Bliss Docking Station III for a month while everyone in the vicinity suffered from sneezes so powerful there were several cases of ruptured sinuses and one prolapsed colon.

The silence made people depressed, psychotic, and in one heavily photographed early experiment, hairless. The sound deprivation room at the university only contained one person at a time since an unpleasant incident when two sisters went in together. One killed the other while hallucinating, mistaking her for a giant SuperBug. They were only in the pod for 90 seconds. But they’d solved that potential problem by installing an InvisiCurtain halfway through the room to keep us from clawing at each other.

I had stopped trying to explain to Red, or anyone, why I didn’t want to make the journey. I had no family on earth apart from my uncle who was interred in a prison colony in the former Republic of Transnistrian Moldova, few friends since Martha and Fastidious left, no ambitions that fit into our society, though several that would fit into Bliss. I would miss the midnight sun and the mountain, the SuperSani walls of the university, my bicycle and the croft. I couldn’t breed on Earth, but there was a chance on Bliss, not that I cared to after watching my mother’s miscarriages. Small creatures, sometimes headless, one still moving and making a noise like a mountain bunny.

It was Rafael who sealed us in. A person I preferred to Arthur. He fitted the electrodes gently to my head and wrists and adjusted Red’s. The silence came slowly; they’d learned from past experience to reduce the sound gradually rather than switching it off. We both wore standard issue medical clothes, trousers and shirts the grey of the winter sky. In the room was a bit of furniture, drinking water and several panic buttons. Everything had the texture of sea sponge.

The silence came slowly. I watched Red’s face and he watched mine. We were excited, I think. Then I became confused, because I thought they’d turned up the sound by accident, or distorted it. That was before I realized I could hear the beat of my heart and the movements of my internal organs. I could hear Red digesting the last of his VitaBreakfast. I hadn’t eaten since the day before, and was glad of that. Then something fell away. I was in an elevator, a narrow space, descending. I had to pull myself up or I would be trapped forever. I could still see Red, the water bottle in my hand, the chair I sat on. I was still in the room, but I was also somewhere else. I was lost, I was getting lost. I needed my bicycle. I needed food. I needed noise and dirt.

Red looked away. I was alone. I couldn’t tell him I was falling because he wouldn’t listen, and then I would know everything I’d attempted not to know. Knowledge for Red, and Arthur, and even Rafael was a thing they used to keep people like me away. I understood it better in the pod than the way I explain it to you now. I knew Red, then, the smile wiping his face clean. He was going and I was not. He would be happy.

He walks into the study. I leave the house. I ride my bicycle to the croft. I look at Bliss through the haze of starlight. The SuperHighway crawls around the ocean, which is surrounded by a beach made of grass which apparently feels like cat fur. I am still.

Miriam is a Stuttgart-based writer and teacher who freelances for publications in Scotland, Canada, England, India, Russia and the US. She comes from Atlantic Canada and lived in Glasgow long enough to be considered a local. She’s worked in the Scottish 3rd sector (specialising in abuse prevention legislation), and taught in Burma and Russia. She has travelled widely, lived next to the Babayevsky chocolate factory in Moscow, driven a rickshaw in Kerala and is known for having strange encounters with border guards. She blogs at http://miriam-littlebones.blogspot.com and tweets as @miriamvaswani.