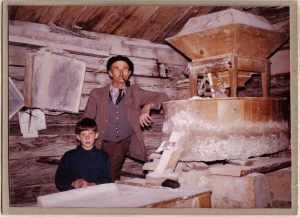 My grandfather was a miller. To my left there’s a framed photo of him and me standing inside the old wooden mill. He was also a carpenter and farmer, raising crops and keeping cows, sheep and goats. A black beret is pushed back over his high forehead, a pipe droops from the corner of his mouth, and he’s wearing a faded brown, three-piece suit, not quite matching. His black and white polka dot tie is skew. He’s leaning against the grinding mechanism with his elbow. I notice his hand looks very much like mine does now. He has that confident and dignified look of a peasant who has worked hard his entire life, proven himself, braved many storms, and achieved respect, honor and standing in his community. I was five at the time the photo was taken – wearing a black turtleneck and look serious, like my grandfather.

The mill, on the outskirts of Reckingen, is built next to a fast flowing stream that runs into the Rhone, high up in the Swiss Alps, about ten miles from the Rhoner Gletscher. During the summer, as a kid, I loved watching the big paddle wheel go round and round. My great-grandfather built the mill. The flour and sawmill was handed down to my grandfather. The large, covered bridge crossing the Rhone in Reckingen is made from the timber that went through his mill. When the photo was taken, the mill was still in use. Now the mill is a museum, recognized as a cultural property of significance in the Canton of Valais. His name was Viktor, but I called him Grossvater.

When I was six we moved to South Africa. Because of the apartheid system I returned to Switzerland when I was twenty-one. Once I’d found a job in Basel, where I used to live as a child, I went to visit Grossvater who was now well in his eighties. My aunt had moved into my grandfather’s large farmhouse right next to the Rhone, and was now caring for him. Apart from a few more wrinkles he looked unchanged. He still smoked his pipe or cigar, wore his black beret and a suit. The morning after my arrival he asked whether I would join him for a walk up the valley to the next village. It was the middle of winter, the temperature was far below zero and at least four feet of snow covered the ground. I was surprised that he wanted to undertake such a hike at his age and wondered how he’d fare, but I agreed immediately, glad to get out and do something. We dressed warmly and set out into the cold.

He didn’t take the road as I thought he would, but chose a series of paths that crisscrossed along the foot of the mountains, used by cross country skiers and farmers who brought their sheep down to the fountain in the center of the village. For a while the steep slope made going tough, and I was struck by his rapid pace. Furthermore, the usually taciturn man was talking while walking, pointing out landmarks all around, explaining their history and significance. He rarely turned around and I stuck close behind him to glean what he was saying, which remained fragmentary. Apart from the acoustical difficulties, he spoke Wallisertiitsch. For most Germans the Swiss dialect is difficult enough to understand, but the medieval sounding Alemannic dialect from the Canton of Valais is unintelligible even for some of the Swiss. But I loved the lilting, musical quality of the dialect that was both smooth like new snow and rugged like granite cliffs. I’d been exposed to it as a child, but I’d spent most of my life in South Africa, and was struggling to recapture my Baslerdütsch. All along he held his extinguished pipe in his hand, pointing here and there with the stem. He was telling me the history, legends and myths of the surroundings. Every stream, cliff, mountain, gully, outcrop, ravine, waterfall, hillock, and chapel had a story. He told me of his own adventures as a boy and young man in these mountains where he’d lived his entire life; and of our ancestors, dating back to the 12th century. All the while he walked at a fast pace, while I tried to keep up, panting behind him. Listening to him was like reading an exciting book with pages missing and others smudged.

Close to two hours later we descended into the village of Münster and settled into a Gaststube. He ordered Glühwein for us and lit his pipe. The mulled wine warmed me up immediately. Now that we were sitting, and there was nothing to point out, he lapsed back into silence and puffed on his pipe, watching the smoke rise. We relaxed, comfortable in the stretch of quiet. Not for long. Taking the last sip of warm wine he said, “Gömmer?” stood up, and we left.

As we walked from the medieval village an old man opened a window above our heads and greeted him. Grossvater waved back, quipped something unintelligible, at which they both broke into loud laughter. As we marched on Grossvater dismissively called the man a little bueb who never left his house anymore, though only eighty. I smiled and we walked back home, this time along the level main road. Grossvater seemed oblivious of the traffic and walked in the middle of road, the way he’d done for decades. He wasn’t going to change his ways and make room for the modern world. I was worried for his safety and what people would think. But nobody honked or got upset. Instead, they slowed down and carefully maneuvered around him, paying respects to the man from a different age, one of the last links between old and new – my grandfather, the miller.

Eric G. Müller is a musician, teacher and writer living in upstate New York.  He has written two novels, Rites of Rock (Adonis Press 2005) and Meet Me at the Met (Plain View Press, 2010), as well as a collection of poetry, Coffee on the Piano for You (Adonis Press, 2008).  Articles, short stories and poetry have appeared in many journals and magazines. http://www.ericgmuller.com/