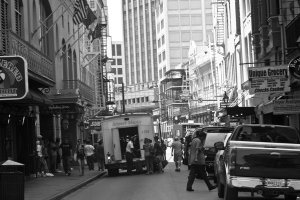 Sometimes bacon smells like Alabama in July – the mosquitoes, backyard swamps and water dogs, alligator tours, badminton in the backyard, three hours of fishing – four cans of soda and not a single bite, lasagna and steakhouses, walks to Las Flamos in the muggy air and dirt roads, movie marathons and unrated TV shows you watch when your parents are napping in the master bedroom. Day trips to N’awlins with its beignets and coffee with no sugar, photographs in black and white, and cathedrals with stained glass window scenes. Momma would try and help her cook but she would wave her away saying, “But it’s your vacation! Sit down.”

Your friends ask why you go to Alabama on vacation and you shrug – you’ve never asked. “Because it’s free,” you think now, and would rather stay home and have sex with your boyfriend in your own bed and stay up till three and drinking a bottle of wine and wake up at eleven to go out for coffee. You’d rather.

I haven’t tasted bacon in four years since I gave up meat and I don’t miss it, the salt and grease. I told my grandmother last summer that if I wanted maple flavor I’d rather drink the syrup as she shoveled four pieces on my plate beside a mountain of scrambled eggs, sliced strawberries, and homemade Belgian waffles. On our last visit we argued every day about eating animals and politics and the church and money and what I was going to be doing with my life and I realized there are a lot of screws missing lately. But I don’t think bacon has anything to do with it.

My eyes ache more than my body ever did and I wonder why I stopped trying but today I put my turn signal on at a stoplight and forgot to turn, drove straight ahead. I drove myself to the hospital but I didn’t know where to park or what to say so I drove to my meeting and was only seven minutes late and applied to every restaurant on Evans street.

Eleanor – Grandma Ellie, that is – called the other day but I missed it.

“Hey,” she’d said. “Hope school’s going well for you.” Pause. “Call me soon.” She paused again as if there was something else she wanted to say but that was last Wednesday or the week before that. I don’t know.

Tomorrow I’ll wake up and pour a shot of vodka in my coffee but I won’t drink it till after my French test and maybe I’ll call Grandma Ellie – Ellen, that is – back on the telephone to tell her that I’m failing and I might lose my scholarship but that’s okay ’cause I’ve got an interview today for a waitressing gig I think I’ve got in the bag and that now I always drink my coffee with no sugar and I had to take a pregnancy test yesterday but it was negative and today my insides are bleeding so I won’t drop out and I’ll tell her that I won’t say ‘I’m sorry’ because that’s a cowardly thing to do but I think my heart’s beating out of rhythm and I can hear it now and even though she was never my real grandma she was the grandma I would have rather had.

“Bye,” I’d say and hang up the phone. I’d rather leave a message, I think, but it’s not like I could control whether or not she picked up the phone. I step outside and bum a cigarette.

Lindsay Cortright is a student and writer currently studying English and Anthropology at East Carolina University.