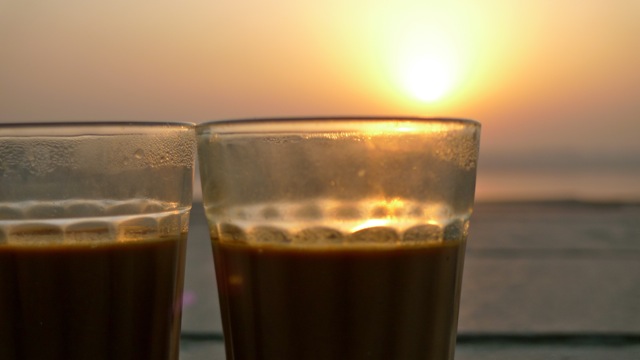 A moment can speak volumes, as you’ll see when reading the tales submitted by this month’s Microjourneys contributors. Our Microjourneys are five sentences or less – do you have one of your own to submit? (Of course you do.) Submit it to outsideinmagazine@gmail.com for possible inclusion in our next issue!

Before India and before chai, it was Bosnia and coffee. Adnan’s mum made it the traditional way – “black as hell, strong as death, sweet as love” – and we sipped it through sugar cubes held, slightly awkwardly for me, behind the teeth. Later, in Mostar and Sarajevo, I’d spend my mornings alone in cafes; sometimes writing, sometimes reading, but always with my coffee. I knew how to order it, how much it cost, and how to thank the waiter, and I remember thinking how content I’d be to do this every morning. Four years have passed now. I still miss it. -Susanna Wickes

The man with the spear washed his grapes and offered them to us, greatly cheering us after more than thirty hours on the train. The spear glinted in the setting sun as he pledged his protection, offered free accommodation, and captured my cell phone number. Days later, I’d look at my phone and laugh: “It’s the spear guy!” –Brandi Dawn Henderson

When my phone rang and the caller ID showed Santosh’s name, I felt kind of guilty, despite the fact that he owed me money. -Barnaby Haszard Morris

It was only 2.4 miles, but considering the fact that I hadn’t run since around summer of 2010, I call that pretty good. And despite it having been around two years since attempting one, I powered through that run with a stamina I never had in 2010. Maybe it was just (re-)beginner’s luck, but I think a little part of it may have been traveling through my old running route again, leaving in the wake of my feet the thought: “HAHA! Old friend, you have no idea the person I’ve become in the last two years.” –Shenan Prestwich

The Harvard students absentmindedly over-caulked windows and whitewashed walls in their project house while enduring their foray into volunteer service on spring break. I turned to my work colleague slouching next to me in worn jeans and a tie-dye shirt, and I laughed at their presumptuous natures as they spoke eloquently of Shakespeare, Goethe, and various theses. She deadpanned back, “Don’t laugh, Sarah. You used to be smart, too.” -Sarah Tilton

I ate his cookies and drank his soda between shots and sniffs and whimpers as my grandfather hovered over me with his thick switch and threatened another round of flogging if I didn’t shut up. Mom and Dad grinned in their seats, echoing Grandfather as he admonished: “Always greet your elders by prostrating!” Now, that’s a surefire mnemonic for a four year old, and the memory makes me less anxious of being a parent.
-Ope Olum’degun

A tape gun encircled my wrist where my bangles used to rest, and irrigation boots replaced heart-embroidered jutis. An Alaskan summer’s work to save for the journey of my Indian dog begins. “What’s your dog’s name again?” “Matilda. Well, actually, I call her Puppy. Or Muppy. Or Mups, actually.” I didn’t talk about how we’d dedicated the Harry Belafonte song to her and danced her around your green-walled bedroom in Gurgaon when she was a baby.
-Brandi Dawn Henderson

They always fought, those two — more intensely with each new cup of brandy. Hold up a camera, though, and they would grin and embrace like brothers. Every time.
-Barnaby Haszard Morris

Persistence can be strangely desirable and persuasive, especially if you can sniff an adventure around the corner. With just days left for our peripatetic quest to end, we decided to try this out as a social experiment. I picked up my phone and dialed his number; the caller tune was a mystic chant in a language I couldn’t quite follow. Suddenly, a deep baritone on the other end said ‘Hello? Yes?’ -Charu Menon