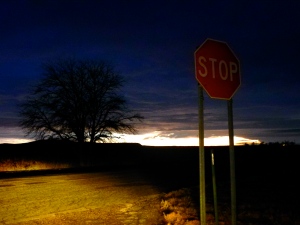 Tall trees, maybe big as redwoods, seemed to form and un-form with every misty illusion of what lay beyond the roadway. She wondered about something just beyond her grasp, tried hard to figure out exactly what it was that she was almost able to recall.

The trees were still; she could detect no sway. It all reminded her of something.

It was something Shakespeare and Virginia Woolf worried about.

She imagined herself in the center of a clearing, surrounded by wolves in various states of desperate hunger. They were starving and she could help them all to carry on, could get them through the Fall and into Winter.

Above her, like banshees, like flying monkeys, like angels– she was guarded by the mothers who raised her. There they were, silhouetted against a darkening sky (skies are always darkening in her dreams) and spiraling downward, working their way toward her. To save her? To serve as witnesses?

And she watched the half dozen women circle above: Viola; Momma; Granny Dodge; Aunt Jet; Auntie Margaret; and Colleen. There were more – more aunties, more mentors– more women who opened their capes and drew her into their breath. They rose and swirled with the morning air over the Interstate as the mist obscured the bridge until the final turnoff. Ladies who bore her from moment to moment, from birth to now.

Horns. The sounds were there; they did not begin; somehow, there was no actual beginning to the sour echo of horns from all sides.

The horns turned to music – at first indistinct and then to the Secret Sisters crooning:

Do you love an apple?

Do you love a pear?

Do you love a laddie with curly brown hair?

She was nearly too late with the brakes, and there was nothing but guardrail between her and the Susquehanna.

She remembered her oldest sister’s advice about always accelerating into a curve. She remembered the time she drove from Sherman down to Dallas on the closed interstate. She had been told the roads were closed and for good reason but she drove past the barriers on the access road and ended up spinning her car into a snowy embankment less than 20 miles into the journey. She slowed down after Van Alstyne and made it okay—she had been lucky. She had luck then.

She thought of that Chaka Khan song that she and her sisters always sang to:

Tell me that you love me, yeah

Marginal effort to slow before impact made even less powerful by the split-second reality of the pickup bearing down, pinning her between him and the back of the moving van.

Now it was Ani DiFranco:

we live to hear the slack-jawed gasping

we live under a halo of held breath

She had lost control, could feel the uselessness of her grip on the wheel. She wondered if she had gotten it right, any of it? Did it begin to make sense at some point, the struggle, the way home? She couldn’t say.

Wait; this was perfect. Fast. Easily explained. So little traffic—there could hardly be much mess and she had less than a quarter tank of gas. (Her ex would have been driven mad by her getting so close to empty.) She had no more say in the matter, of that she was certain. Survival was no longer up to her.

No deer. No birds. She wanted to see an animal before it was over.

In the new, noiseless space, she conjured Colleen with crystal clarity– her freckles, her long neck, her raspy voice and the winking, brown-eyed smile with which she entered rooms. Colleen could have ridden shotgun on this one, could have held tight to the roll-bar of love as wheels left pavement and she would have screamed, “Yi-HA!” at the final moment. “Might as well, right?!” she would have said, grinning and as aware of her own rhetoric as she was of the need for it.

Darlin’ had only known her for 2 years—the first year and half, they worked together at the real estate development company in Beverly Hills. The office was actually tucked into a corridor of The Beverly Hilton, next door to Merv Griffin’s office and above Trader Vic’s.

They used to stand on the sidewalk facing Wilshire and watch the Mazda’s, Mercedes and Maserati’s drive by; the trophy girlfriends perched next to fossilized George Hamilton-types; overloaded pickups dangling all manner of gardening gear. Colleen smoked Marlboro Light 100’s and laughed off the stress of packaging $500 MM of Southern California real estate and assured me that this too would pass.

Darlin’ missed her, missed knowing where she stood with someone as clever and worldly. And Colleen had raised two girls. She was an un-parented parent who seemed to do it without fucking it up, seemed to still have a relationship that made sense with both of her teenaged daughters. Once she got the diagnosis, she said she was instantly grateful for her girls and for how they had turned out – only, she didn’t say it that way. Colleen had the best way of saying things.

As of that morning, just north of Havre de Grace, It had been more than a decade since she met Colleen’s oldest daughter for the first time in the elevator at the Loews Santa Monica Beach Hotel on their way to Colleen’s memorial.

“Oh, you’re Darlin’,” said the beautiful young woman with the pixie haircut as she smiled a relaxed, full smile, dropping the anonymously polite demeanor she had been extending to the crowd of her mother’s friends in the lobby. She had, in fact, just extended this courtesy to the only other person in the elevator, a secretary with whom Colleen and Darlin’ had worked. “It’s so nice to meet you.”

Afterward, as they left the elevator, the secretary stopped and put her slim hand on Darlin’s: “Did you hear her?—Colleen told her daughter about you. That’s really special.”

Darlin’ was glad to be there. Glad this was the moment she could live in, back in Santa Monica, rising in that gleaming, plush-carpeted, glass-walled elevator car, nervously smiling at the young woman who had her dear friend’s eyes, all of them facing the Pacific.

Rebecca H. Harris received her BA in Psychology from Austin College in Sherman, Texas and her MA in Writing from The John’s Hopkins University. She is a former Instructional Designer and marketing specialist, is the Poetry Editor for Baltimore-based literary zine, Seltzer, and works on a consulting basis as a writer and editor.