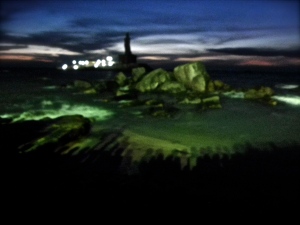 “Any attempt to conciliate an inexplicable momentary state with logic strikes me as a boring kind of game.”

I’m in Manuel António, Costa Rica at the rim of the Pacific Ocean and I haven’t been back there in a long time. I left eight days ago but the days right after you leave are longer than the rest. I’m standing on sand and the skies are dark and steely, and there are a thousand horses drowning in the sea. It’s horrible and strange and silent; the air sucks in noise just like water does. The horses are struggling in the water against the waves, their own weight. Some are on their sides, on their backs, positions their limbs don’t know how to handle, and they don’t know how to center themselves again. Their knotted walking-stick legs so capable on rocks and terra firma seem spindly and over-extended, like awkward egg beaters in the water. The horses are giant, like long-necked sea dinosaurs. They crane their necks up, nostrils flaring and heads thrown backwards to try to suck in as much air as they can during that fleeting dry hang-time that their heads are above water, before they crash down again to get a lung full of salt and sea. Some have just resigned to drowning, lying there on their side taking in the water, but the ones that intrigue me are the ones attempting that half-moon curved act of resistance. They get thrown back down again and again to their aqueous graves, but they still struggle. They are dying, they know they are dying, and they dance, like young punks in ripped sneakers, throats thrown upwards, arms punching holes in the sky.

A girl is standing in a dress behind me reciting a poem about them which adds metal cymbals and screams to the scene but it’s turning the horses to art so I let her stay. I couldn’t make her voice or the words leave anyway.

They’ve called a doctor from some banana-leaf house and he arrives with a bag and a stitched-up horse’s head on his neck as his own (he’s akin to them so he can work miracles). He’s come to try to save the horses. But he takes one look at them all in the sea and retreats behind a door. The iron door closes heavily in front of me and a wheel turns and I’m behind the door, separated from the horses. The walls are made of glass so I can see beneath the surface of the water, and the skeleton of a horse falls down softly to the ocean floor, and I think to myself that anyone who swims these waters will come across these horses at the bottom until waves move the sand to bury them.

You told me it played out like a Charles Bronson-style revenge movie: you didn’t have a moustache, or skin like a furrowed leather hobnail boot, but you did grab the knife from his hand by the blade and stab him through the chin. He was my ex-husband, and the blade erupted through his palette and into his head like a monument plunging up through the ground and into the sky. You didn’t have a line like, “Do you believe in Jesus? Well, you’re going to meet him,” or “I’ve got a cure for your dandruff problem” right before you detonated a bomb, but you were pretty cool, in retrospect. The way you tell it, anyhow. The way you tell it, my ex-husband, who does not exist in this world but sounds like a total psycho, abducted our child. He wanted to kill us and raise our son in the art of kidnapping and hiding out in motel rooms and being the kind of psycho that only populates dreams. I guess he’d teach him to speak in hieroglyphic languages and shape-shift and bring the kid you sat next to in your sixth grade history class, long vanished from your life, into situations he has no business being in, if we’re talking that kind of psycho.

But you killed him, and I told you, “Great! That means you killed the part of yourself you were struggling with!” Because if every player in our dreams is a part of ourselves, a different key on our piano struck to form a chorus that we can’t distinguish in our waking hours, then maybe my psycho-ex was really the “ex-you,” the you before you came to be whoever you are now, the one I fell in love with when I was someone else as well. Maybe he and all that he wanted could very well change the present you, and me, and the cats and the kitchen and all that now colors your days. Or he might threaten the future you, your son, the potential of your genes. What did that guy hopping out of the past, strange and unknowable to you now, think of love, of its limitations and its possibilities? What did he think of self-determination, of self-creation? What did that guy ever think he’d do if he found himself here, with us? You start to think about all that, and sometimes you’ll end up defending your potential futures against your past by stabbing parts of it in the chin.

You told me, “Or maybe I just like action movies.” And, “We need sausage for the spaghetti tonight.”

Shenan Prestwich is a Washington, DC-area poet, cognitive researcher, over-confident dancer, and general hobby collector. She’s been living by Robert Hunter’s edict that “once in awhile you get shown the light in the strangest of places if you look at it right” ever since she heard it in a Grateful Dead song long ago, enjoys compulsively kicking over every stone in her path, and uses poems to process most of what she sees (the rest is taken care of in the form of epic playlists). Her work has been seen in a diverse spread of publications including Slow Trains, PigeonBike, Lines + Stars, Dirtflask, Dr. Hurley’s Snake Oil Cure, The Dead Mule School of Southern Literature, The Camel Saloon, Lip, Seltzer, The Baltimore Review, and Apeiron Review. In addition to her literary interests, she enjoys old cameras, strong scotch, long drives, loud bluegrass, excessive hospitality, good people, and bad karaoke. You can follow her pursuit of all these things (and more!) over at shenanprestwich.com.