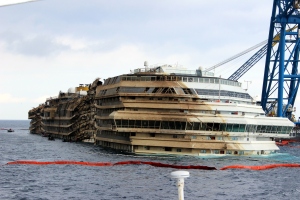 In planning our honeymoon, my husband and I were advised to laugh, relax, perhaps run on the windy shore in a linen kaftan – like a Sandals commercial, with “(I’ve Had) The Time of My Life” playing behind us. But as ever-moving, never-resting New Yorkers, we are not wired to enjoy such an inefficient use of time. Instead, we curated a four-city, eleven-night trip through Italy, overstuffed with dinner reservations, cooking classes, and walking tours. We didn’t want to savor. We, like many of our urban brethren, wanted to consume: wine, food, clothes, art, history, together a cornucopia of Instagram fodder.

Heeding our travel agent’s advice, however, we did reserve three nights to try to understand more carefree ways. We would leave Florence and drive three hours to the coastal fishing town of Porto Ercole, a sleepy destination with an idyllic five-star resort compounded into the hills, a place that would afford us the ultimate post-wedding exhale. After booking, I reached out to the resort’s concierge to learn more about the amenities and excursions available on this most luxurious leg of our trip. “Bueno Sera, Miss,” he replied, attaching a brochure. Separate and apart, however, he mentioned this:

“Our grounds are also situated near Giglio Island, where unfortunately, the Costa Concordia remains visible off the coast. It is only a short hydrofoil ride away.”

Upon deviating from its planned route, the Costa Concordia struck a reef on the evening of January 13, 2012. The ship ran aground, dramatically angled on its side, resulting in the deaths of 32 people. Now an idling graveyard, its presence remains a visible reminder of fear, negligence, and loss. Why our concierge would suggest, and in fact feature, this sight as a recreational attraction was beyond my comprehension.

Even erring toward his best intentions, I knew he could not be suggesting this to his Italian guests. I took offense to being stereotyped as some kind of uncultured American, one who would dine at the Hard Rock Café in Rome, or gawk at a half-submerged cruise ship, in lieu of more authentic experiences in unfamiliar places. He knew we were New Yorkers, which is not an irrefutable badge of honor, but should at least indicate that our curiosities are more legitimate than that kind of spectacle. Indeed, New Yorkers are many things—rude, impatient, jaded—but we are never tourists.

On a grander scale, as New Yorkers, we are sensitive to our own grounds of tragedy becoming misguided attractions. Millions of hungry tourists flocked to Ground Zero in the decade following 9/11, with no memorial, Freedom Tower, or museum to experience. Long past the years of volunteering efforts, they came to see the hole in the ground. I have worked in the Financial District for years and can state with certainty that these people exist in grand tour-guided scale—ogling, photographing, and obstructing without purpose. Once, one such tourist asked me where the 9/11 Gift Shop was. I snapped, “You’re standing in it, asshole,” and stormed away.

Months after my initial e-mail exchange with the concierge, my husband and I were several days married and onto the self-declared relaxation leg of our honeymoon in Porto Ercole. Our five-star resort, tucked high into the hills, was lovely, but its celebrity-friendly atmosphere felt almost too “celebrity” for comfort. By the third day, we needed out of the compound, for the sake of our sanity and our wallets. On this remote coast of Tuscany, however, Giglio Island was the closest and most affordable place to visit. And at the urge of my husband, I painfully acquiesced, only hoping there would be more to see there than the elephant in the water.

An overpriced driver shuffled us down to the mini-harbor, where we rushed onto what was, effectively, the Italian Staten Island Ferry. At departure time, the hydrofoil stirred with businesspeople, families, even a man grooming his Shi Tzu, all of who shared something in common with each other and not us. They were ordinary Italians, traveling to the island for ordinary purposes. Seemingly becoming the loathsome tourist myself, I felt too uncomfortable to fight for a seat, let alone take photographs.

We steamrolled ahead in the morning wind, and a chill washed over my underdressed body. We thought the forecast called for sun and heat, but that did not apply to the open water, where the low-lying clouds distorted our senses. The ride, we were told, should have taken eighteen minutes, but we were going on forty-five with no island in sight. The gray air thickened with mist, and our patience waned. Then, as we cut through the lowest of the clouds, land reappeared. And there she was.

The surrounding area boomed from her new reality as a coastal construction site. Eleven days earlier, engineering crews completed a historic parbuckling operation to right the ship, which had been stranded sideways off the island’s coast for nearly twenty months. From afar, the towering machinery and industrial barges diminished her presence, replacing the enormity of what happened with the technicality of salvaging the pieces. The way they swarmed, everyone wanted a piece of her. Yet, as we closed in on the port, only a football field away from the wreckage, her magnitude hovered over all of us.

Balanced upright but not floating on her own, only her top-most decks peaked above the sea, but still seemed miles high. Surf smashed over the guest room terraces, undoubtedly swallowing up the remains of her civilized past. Now upright, the ship bore a distinct vertical water line, marking the border between the lighter half that had faced the sky, and the rotting half that had been submerged in saltwater. Because she sat parallel to the island with her once-submerged side facing inward, the reveal of her irreparable damage only came when our hydrofoil pulled around the bend, like a ghastly “before and after,” a juxtaposition of life and death.

Grandiose ships that sail the path of the Costa Concordia exist for celebrating those cornerstone birthdays or commemorations of love, all milestones in people’s lives worth traveling the world for. In those few moments, on our dream vacation, we were staring into someone else’s nightmare.

Instinctively, I reached for our camera.

Over the next few hours, I was mesmerized. I took hundreds of photographs of the ship, the salvage boats, the divers’ tents, the helicopters. Shedding my predisposed code of conduct, I certainly did not act like a New Yorker. Yet, I didn’t quite feel like a tourist, either – at least not in the manner of those I categorized as unquestionably disrespectful and intrusive before that day. I felt like an individual, having a personal experience with something striking enough to capture on film. Perhaps I judged the tourists in my city too harshly. Perhaps they too, at times, were paralyzed by deeply personal moments of their own. For me, staring out at that ship, crippled in an infinite sea, gave me reason to reflect, on both the fortunes of our honeymoon and of my life. Being a tourist had nothing to do with it.

Later that afternoon, we boarded the hydrofoil and set sail back into town. Leaning in close to my new husband, I clenched his hand and held on tightly for the rest of the trip.

Joelle Berger is an attorney living in New York City. In early 2013, she left the grip of private firm practice to pursue a more sustainable existence and, most importantly, her writing. She has published in Mr. Beller’s Neighborhood, Women’s Health, the Gainesville Sun, and other publications.