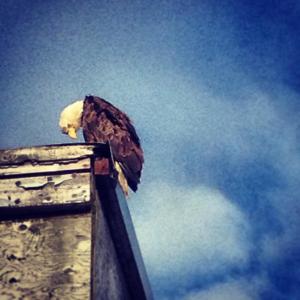 You’ve never been to Adak. I can guarantee that. Few people have even seen the island, another dot in the ellipsis of the Aleutian chain that stretches deep into the Arctic. That far north, it’s perpetually winter. Even on a good July day the temperature barely breaks 50, and you’d be lucky to catch a moment of sun instead of the usual overcast and drizzle. The gray of the skies is so deep that it makes Seattle look like L.A. Plus the wind always blows. The first thing you see, stepping off the runway, is a hand-painted sign: Welcome to Adak – Birthplace of the Winds. They aren’t kidding; the maritime breeze is incessant and damp. The good news: it keeps away the bugs. The bad: it’s never warm.

In 1942 the U.S. military constructed a base on Adak to repel the Japanese who’d invaded the westernmost Aleutians (so far west they’re actually east). To dissuade further occupation, they scattered the nearby hillsides and beaches with landmines and other explosives. The war ended but the base remained, as did the ordinance.

During the Cold War, the base once more proved useful. Its proximity to Mother Russia allowed the U.S. to keep a constant vigilante presence near their adversary from the dreary emptiness of the Bearing Sea. Complete with a bowling alley, movie theater, high school and McDonalds, and 6,000 militarily-involved persons, Adak, the westernmost city in the United States of America, reached its pinnacle.

Since then, the base has been abandoned, the buildings sacrificed to rapid erosion amid the constant snow, rain, and wind. The population plummeted to less than 300 people. Today, if you want to see a modern premonition of post-apocalyptic fallout in full physical degenerate glory, visit Adak. The military barracks and offices that spatter the countryside stand like hollow husks as witnesses to the brevity of man’s voluble nationalism and fear-driven competition. Row upon row of unassuming, nearly indistinguishable homes with alternating roof colors of red, blue, and maroon, form the decaying maze of what is now the city proper. The McDonalds is long closed, its interior creepily empty, sanitized and clean. The bowling alley is deserted, the school forgotten but never emptied. On the other side of their poorly blocked doors lie textbooks and papers. Old safety posters from the 1990’s hang on bulletin boards, warning non-existent kids about the dangers of unexploded ordinance. Some lights still work. In the gym sit old weights and barbells, stacked and ready for hands that have long since left. The remains are interesting. Supplies were simply abandoned, almost as if the school were vacated in an instant, without warning. You could film a zombie movie there. You wouldn’t have to change a thing.

The handful of residents who still remain despite the destitution live below roofs of what was once military housing. Blending with the abandonment, it’s hard to distinguish which of the houses are vacant and which ones are populated in spite of their state of disrepair.

My first night on Adak I was invited to a pig roast by the woman at the airport who gave us the keys to apartments and trucks (everyone on Adak seems to work for the airport). The roast was a strange affair, located in the garage of unit 64 A. On a plastic table – the kind they use at school fundraisers and fairs (which are also well proportioned to serve for the occasional college beer-pong tournament) – were spread a variety of dishes, most of which seemed conspicuously to have originated from a can. There was pasta, beans, macaroni and chili. There was also some sort of egg salad, a yellow-green mass that quivered whenever the table was bumped. The pig, skewered and already roasted, lay half-stripped of its hind, on a separate table. At the back of the garage was another pig, similarly impaled, and roasting over a small rigged grill. I went for the pig, taking the carving knife in hand, and cut myself a piece that I deemed appropriately sized. Wrong.

The man beside me kindly asked me if I pussy and told me my piece of pork was too small. “Here,” he said, and cut me a piece half the size of my head. I told him it was a lot. He asked if I didn’t like it. The man was gray-haired with teeth stained deep yellow. Cigarettes I assume. His voice, when he spoke was raspy and overenthusiastic, as if he were shouting at a conversational volume. The thing that struck me most about him, oddly enough, was his T-shirt, a deep red XL with an emblem of an eagle, shrouded in a tattered colonial flag. The caption consisted of two words, juxtaposed so as to imply an equivalency between the two: Freedom. America.

What struck me about this image was the overabundance of patriotism it displayed. Not the sort of grateful-to-be-a-citizen-of-a-state-that-affords-many-freedoms-though-I-do-believe-in-scrutiny-and-while-better-than-some-is-far-from-perfect kind of attitude that I myself employ, but rather a fuck-yeah-AMERICA that reminds me of over-enthused sports fans screaming incoherently about their team. Something about the emphasis you place on the second syllable reveals how strongly you share this attitude. The stronger the “mer” of America, the prouder the speaker. (Eg: this is a-MER-ic-a! Some even drop the initial “a” in favor of an even punchier “mer”.) It wasn’t simply the shirt that surprised me though. We’ve all seen shirts with proud eagles framed in red, white, and blue before. What surprised me was the context. The realization that this rock, nearly lost in the void of the Atlantic, almost further west than the International Date Line, that this island is a part of the states. That this man, piling pork upon my plate in a forsaken garage in an abandoned military complex on the fog-shrouded rocks nearly lost to the desolate cold of the Bearing Sea, was as much an American as Bill Gates. That the citizens of empty Adak island are indeed my fellow citizens and that we share an inherited nationalist bond (and have shared this, since even before I knew their island so much as existed) that identifies and places us within the context of a specific cultural ideology and framework. The framework of the U.S. of A.

Proud to be an American? Yes, the man threatening me with an enormous slab of garage-cooked ham certainly was. And that’s when I noticed the (other) eagle. This one was real. Poised un-majestically on the crooked curve of a broken streetlight, it’s feathers matted and askew, streaked with dirt and grime, the white of it’s bald head more of an off gray or dun, the bird scanned us with its sullen scavenger gaze, shifting its weight from one crooked talon to the next, its beak stained brown. Beyond rats and caribou, the only wildlife that Adak supports in abundance are birds: seagulls, ravens and eagles. But this eagle, waiting for us to abandon our feast so it might root through the trash and scraps, was not the kind of eagle my encounters with the signifiers of American patriotism conjure to mind.

Symbols are tools of an ideology, indicators of a code. They serve as beacons and banners, offering rallying points where followers may orient themselves, agreeing on a common direction, finding instances of solidarity among a complex and varied populace. When presented with an image of our national fowl, a regal eagle, swooping across the undulating waves of red, white and blue banner, we think of freedom, pride, and strength.. But mostly freedom. This is the bird we deem the master of the skies, king of the air, soaring uninhibited, unthreatened, free. The concept of “freedom” is the base framework for our nation, but without symbolic guide marks, such an idea may fail by many to be expressed or identified with on an emotional level. We use symbols to evoke the ideas we hold as essential and common within the matrix of our society. However, the significance of each symbol is subjective. This isn’t necessarily a weakness. The malleability of their meaning as signifiers often lends them further power. Through their flexibility they can be interpreted and understood on an individual basis, creating personal ties to a common symbol. If a symbol is too rigid, it loses its identifiability. If it’s too broad, it looses its significance.

The eagle, I realized, must take on a very different kind of meaning to the people of Adak, who see them on a daily basis, not as majestic birds, but as scavengers who linger on the boarders of trash heaps and dig through dumpsters. This man, with his proud-to-be-an-American type T-shirt, displaying our nationally symbolic bird, was also displaying (as the supposed representational image of his nation) a dirty, trash-eating fowl. Interesting that it’s all still America after all.

Gordon Taylor is a Seattle-based writer and haunter of cafés. He holds a BA in Creative Writing from Western Washington University. His work has appeared in Suffix, and 100 Word Story. In his free time he travels the globe.