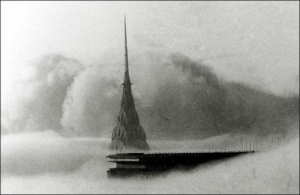 Wentworth points to the Chrysler Building across 42nd Street. The time is Saturday morning, July, 1978. We are two men in our twenties, college classmates. The air is close and warm.

“No construction activity,” he says, “and one poor, unarmed guard who wanders the perimeter.”

“Is that him, lighting a cigarette?”

“Affirmative. Best of all, no lock or chain at the plywood entrance.”

“When he leaves on patrol, we dash in?”

“Correct, but no dashing. Be nondescript.” As the guard turns away, Wentworth strides across the street. He does not check both ways. His long legs move fast, and I hurry to catch up.

On Lexington Avenue, we reach the scaffold that surrounds the building. Wentworth yanks the hinged plywood panel and slips through, with me on his heels. He shoves the panel back into place. We stride through glass doors into the lobby, which is dusty from construction. A large sign warns about unauthorized personnel, insurance liability and leasing opportunities.

I admire the elaborate inlay on the elevator doors. There are banks marked for different floors, like local and express trains in the subway. Wentworth scans the buttons.

“Express to sky lobby,” he says.

An elevator door opens and we scoot in. The elevator whisks us forty stories upward.

“Does trespassing give you a thrill?” I ask.

“What else have you gotten into?”

“The arch in Washington Square—there’s a kind of attic. The abandoned subway station at City Hall. The San Remo, south pinnacle.”

“No breaking!” He holds up a hand as if swearing an oath. “I’m an urban explorer. Leave nothing but footprints, take nothing but memories. I don’t even take photos.”

The door opens, and we step out to another deserted lobby.

There is one call button for “UP” so he hits it. Immediately, a door opens and we get in. The numbers in the cab get erratic near the top, ending in initials.

Wentworth nods. The door closes and we rise.

“The Chrysler Building was designed by William van Alen,” he says.

I reach for my pad.

“No notes. Look it up later. The tallest in the world when it opened in 1930, it had an Observation Deck on the 71st floor which closed after a year.”

“The Empire State Building was completed in 1931. It was then the tallest. The Chrysler had something else, though, an exclusive dining room for top executives called the Cloud Club. And here we are.”

The door rolls back and we step into a fantasy of a gentleman’s club, like a gorgeously appointed tomb. Stray pieces of broken furniture huddle here and here, and wires dangle from holes, but all is richness and color. There are carved wood beams and mock-Tudor oak panels, stained glass in lead frames, plank and parquet floors, an Egyptian locker room, and a toilet clad in pink marble, like a Roman bath.

We wander through the space. I move slowly, lost in wonder, while he prowls and darts around corners. What is he searching for? A marble stair in classical style with a bronze railing ascends. Wentworth takes it two steps at a time.

Upstairs is a dining room with vaulted ceilings. Murals line the walls—a New York skyline, a frieze of automobile workers, and an oil refinery—all in the modernist style of the 1920s. With windows on all sides, the space is airy and exhilarating. Polished granite dissolves the columns, and mirrors play tricks on the eye.

I open my mouth, but Wentworth is too far ahead to hear. He opens doors, taps on panels, and flicks switches. He tries yet another door and crows.

We walk up a cramped service stair to another floor, a warren of kitchen, laundry and janitor closets for the club below. Wentworth inspects it briefly. I stay close, afraid of losing him in the maze. We return to the stair. We climb and emerge in another vaulted space with walls that slope inward, triangular windows, and a decoration scheme of stylized, silvery clouds. The floor is shiny, and a glass control booth occupies one side of the space, up a few steps.

“Or a radio station,” he says. “Radio and early television broadcast from the spire. In those days, programs were live. This must have been a studio, adapted from the Observation Deck.”

While I study details, he searches as before. He finds a narrow stair up.

The door at the top of this stair opens to outside. A chill breeze blows, as atop a mountain. We are now above the envelope of the building, though still inside the shell. In fact, we are in the stainless steel helmet or crown. Pointing in all directions, the triangular openings have no glass, only metal mesh to keep out birds. The structure of the building is oddly medieval, a groin vault of concrete arches that soar forty feet or more.

“Too cold to stand still.” He shouts over the breeze.

Metal ladders wind through the architecture, with metal grates as landings. Wentworth starts to climb and I scramble after him. The flimsy structure shakes under our bodies. When we reach the top, I am winded from the exercise. I cling to the ladder at his feet. He prods a ceiling hatch, trying to discover its secret. It springs open.

He pushes up the cover and pokes his head through. I cannot hear what he says, so I tug on the hem of his pants. He retracts his head far enough to talk to me, peering from below.

“This is it, the absolute top. Only big enough for one person. I’ll go first.”

He climbs through the hatch and disappears. I wait my turn on the ladder and shiver. After a minute, his legs wiggle down, find their footing, and come down a few steps. His head ducks and he surveys the situation. We cannot pass each other on the ladder.

“Go back to the next landing,” he shouts. I do this, he descends, and we exchange places in a little dance, tiptoe on the metal grate. I climb back to the hatch and through it.

I crouch on hands and knees in a sort of cockpit. There is one small triangular hole on each of four sides. All I can see through them is sky. I am under the silver spire, nearly a thousand feet above the ground. There is nothing in the holes, no glass or mesh. I crawl toward the one that faces south and stick out my head.

The city lies far below. I see no people or cars, only masses of buildings. The Empire State Building looms a few blocks away, a narrow tower like the one I am in. Beyond it, Manhattan stretches to the tip. The expanse of New York Harbor glimmers beyond.

Rivers to east and west interrupt a tremendous built-up area. I hear a low roar like nothing in nature, the noises of the city blended and filtered by distance. An airplane flies far to the west at eye level.

Directly below is the skin of the crown, sheets of metal dimpled by rivets. From this vantage, I can’t see the gargoyles, like oversize automobile hood ornaments. I think of crawling out, then think again. I crane my neck until it hurts, relax for a second, and repeat. I want to see as much as I can, as much as there is to see.

Wentworth’s head pops through the floor. He wears an impatient frown.

Reluctantly, I crawl backward and down the ladder. I pull the hatch over my head with a clang. Wentworth is already past the landing. He clatters down the rickety steel, on to the next adventure.