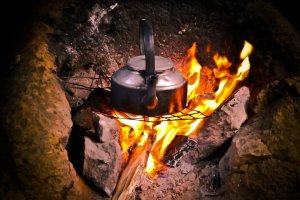 This is a continuation of an excerpt series from Ope Olum’degun’s novel-in-progress. To catch up click here, and then here.

Kokonsari lived in a face-me-I-face-you: a simple house with an absent front door where the rooms faced one another across a fairly wide passage. Each tenant rented two rooms – a bedroom and parlour, and you had to leave one to enter the other through the corridor. The rooms themselves weren’t large, but they had big windows and ceiling fans, which not every house in town could boast of. All the tenants shared a bathroom and a kitchen, often colonizing one spot where they cooked. When I asked him why he lived there, he said most of the vigilantes lived in houses like that. “Close to the rumour mill,” he called it.

There was a crowd in the house when I got to the front door. Recently Hassan, one of the tenants, had begun showing English soccer games in the house for a fee. He had been advertising on a blackboard sitting on a tripod on the roof. The blackboard announced, in half-literate chalk scrawl, the games showing that day, what time and how much it cost to see which one. On weekends, there were two blackboards. I noticed another one nailed to the clay walls in the dimly lit passage. It showed you the layout of the house and which of Hassan’s rooms your preferred game was showing. Manchester United’s games often showed in the passage – they had the most fans.

The passage was chocked up with rows of benches as in pews in a church, and it had a large TV for an altar. Some of the men wore singlets. Others had pulled off their shirts and were fanning themselves with them. Sweat dripped off their backs into the crack of their butts, which they absent-mindedly wiped with their hands. The air was musty and smelled like the mixture of a thousand men’s urine vaporising under the sun, but everyone seemed oblivious. They just stared venerably at the TV and chattered among themselves.

I squeezed past the rowdy rows, ducking under low hanging wires and avoiding low hanging ceiling fans, which hung and spun lethargically off the low roof – some customers had learnt the hard way not to jump up in jubilation when their teams scored.

Kokonsari’s apartment was the last two rooms on the left, and the bedroom door was unlocked. There was a backpack open on the bed, and he froze with chewing sticks in his hand when I entered.

“What are you doing here? Did you come by yourself?”

I shrugged. “I fought a gambari at school today. Where are you going?”

I kicked off my rubber sandals and sat on the bed, facing the wall where he hung a big poster of half-naked women who were swigging from huge bottles of Heineken on a beach. They looked like the women who swallowed men’s pricks in the video cassettes Kokonsari kept in his drawer. “My blood tonic,” he called them. Their flimsy panties and bras barely covered anything, and I often imagined Aunty Afusa wearing them. I leaned into a pillow on the bed and dug into the backpack. Tucked under two folded t-shirts were a gun and three magazines. I slid my thumb through the head of one of the magazines and pulled out a bullet.

“Yola, the Seriki’s son. Where are you going?”

“Did he threaten you?”

I fondled the bullet and twirled the tip between my lips. “Hmm.”

He dropped the chewing sticks in the bag. “Don’t be afraid. He’s just a kid like you. Well, not quite like you.”

“Where are you going?”

He opened the wardrobe and rummaged through it.

“I have to be in Lagos tonight.”

I stared at his back, waiting for him to continue. The thought of him disappearing like Dad made my stomach tighten. We would be alone. And no one would be there for us if – no, when an all-out war broke out. I slid the bullet in and out of my mouth, rolling my tongue over the almost tangy metal. Kokonsari pulled out a shirt from the wardrobe and tossed it on the bed. He dug further and pulled out a cleaver, then a machete, then a sachet of lollipops. Then he turned round and faced me. “I’ll be back in a day or two. I’m going to meet with the OPC guys.”

“Why? What’s happening?” I spat the bullet into my hand.

“Nothing. We just have to be ready for everything.”

“What do you mean everything? You said we’re safe here.”

He sat me down and wrapped the cleaver and dagger in a towel before packing them into the bag. Chatter from the soccer game viewers grew louder – I’d momentarily forgotten about them. Kokonsari went to the door and peeked outside. He shut the door and returned to the bed.

“No one has seen MC Hammer since last night,” he said in a low voice. “We think Hausa soldiers kidnapped him.”

“You have to be very careful, ok? You can’t be roaming around town anyhow now. So gbo?”

“And these people cannot know I’m going out of town,” he continued, pointing towards the corridor. “In fact, nobody can know. Not even your grandmother.”

“Right now only the vigilantes know MC Hammer is missing. We told his wife he went to Lagos to buy kittens at Tejuosho Market. That he’ll be back in three days. I have to find out what’s going on and arrange for reinforcements with OPC in case we need them.”

I clenched my fist around the bullet and shoved it into my pocket, as if it was the one weapon I needed to protect my family. Should I steal the gun, too? Kokonsari pulled my left ear.

“Do not say anything to anybody. Do you understand?”

He straightened up and tossed the sachet at me. “Share that with your sister.”

To be continued in Issue Seven…

Ope Olum’degun is a fiction writer who prefers to read non-fiction. He moved to the US from Nigeria in 2009 and is currently in the MA in Writing program at Johns Hopkins University. When he isn’t selling books and magazines to finicky Washingtonians, he’s developing and writing a radio drama series for the National Museum of African Art.