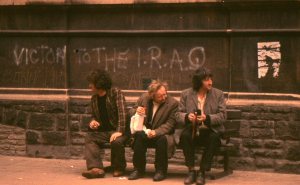 book review of
THE GREATEST ORDEAL:
An Account of the Author’s Epic Journey
from Llantwit Major to Ogmore-by-Sea
by Pemmican C. Hargrove

In the spirit of Francisco de Orellana, Lewis and Clark, and Sir Richard
Burton, author Pemmican C. Hargrove undertook this perilous eight and a
half mile journey along the South Wales sea coast sometime during the
winter of 1984. (Smudging of his journal pages caused him to lose the
valuable record of the exact days involved in making the transit, and the
harrowing nature of the experience itself left direct personal recollection
in abeyance.)

But while Orellana, Burton, and the others sought their destiny in a
region far from their homeland, Pemmican found his deepest, most
edifying trial a mere bicycle ride from his native village of Llanblethian,
South Glamorgan. Not that our hero would have stooped so low as to
employ such a conveyance on such a grandiose undertaking. That would
have been too easy. Instead, despite the nay saying of Postmaster Evans
and Jones the Butcher, Pemmican C. Hargrove determined to make the
entire journey—there and back—via the rural transit routes of the Welsh
public bus system.

While this led, inevitably, to awkward decisions (Should he take the
through bus to Swansea and double back at the Porthcawl exit? Should he
attempt the heretofore undocumented transfer point just west of Saint
Donat’s castle? Would sandwiches be available after mid-afternoon?), our
intrepid traveler soldiered gamely on, certain that—whatever fate might
yet befall him—his journal notes could nonetheless be used by those to
follow.

Mr. Hargrove, in fact, has been something of an adevnturer for
years. The Welsh, he tells us, would call him treiglad, or wandering one,
though perhaps this is an appellation peculiar to himself, for when this
reviewer mentioned the peregrinations of Pemmican to Old Ron, the
driver on the Betwys-Llandyfodwg run (a section used by Mr. Hargrove
during the return leg of his journey), he recalled him well, but said that he
was known to the transit employees as “old moel-ym-mochnant,” a phrase
he would only partially translate, as meaning the bare somewhat on the
pig’s something.

In any case, various asides sprinkled across the pages of this book
detail certain of his earlier escapades. In addition to a nearly-perfect
circumnavigation of Rhode Island (leaving out the tricky bits along the
coastal edge), Pemmican also once paddled solo across Hyde Park
Serpentine and—during a misguided quest for the original source of the
Bath bun—walked the entire length of Cheltenham High Street thrice in
succession, stopping only for tea and biscuits.

But all of these achievements pale in the face of this, his greatest
endeavor: to be the first member of his family to make the crossing from
Llantwit Major to Ogmore-by-Sea without ever stopping for a takeaway
en route. Mr. Hargrove describes various previous attempts by members of
his lineage. (His Uncle Ethelred, who mistakenly set off east, rather than
west, was the first of his family to discover the Severn Bridge and, as
such, has remained a legend in Llanblethian and the region thereabouts.)
The crossing itself, to judge by Mr. Hargrove’s description, would
tax the hardiest among us—and as one of those plucky few to have
traversed the Wirth Park wilds with little more than a walking stick and
the trail guide to the Eloise Butler Flower Sanctuary, I believe I am in a
position to know.

Problems began even during the departure from Llantwit itself,
when Mr. Hargrove took issue with the driver’s scheduled tea break. Old
Ron—for it was he at the wheel on this, the first stretch, as well—was
obliged to recite the trade union regulations regarding mandatory hourly
rest stops and nearly missed opening time at The Randy Goat.
Pemmican remained unmollified, however, and more than a little
worried about the loss of time. His impatience cost him a ride at the Saint
Donat’s roundabout, when traffic slowed the bus enough for the conductor
and his assistant to eject our hero from the back exit under the guise of
enabling him to get the 364 Express to Merthyr Mawr.

Sadly, Pemmican would learn that the elusive and long rumored
Saint Donat’s transfer point was, in fact, a myth. The 364 crossed to the
north, at Splott, and would have to be reconnoitered on foot, the better
part of a mile away.

And so he set off, with the smell of the sea air luring him ever
south, rather than the northwesterly direction so desperately needed to
reach the goal. It was during this lonely stretch that Pemmican ruminated
deeply on the meaning of life and the awkward early closing hours of so
many country pubs. He even admits that, had the chippie at the Saint
Donat’s crossroads not been closed on account of repeated grease fires, he
might have broken his vow and ordered out for the journey ahead. (This
familial longing for transportable food had been the undoing of his
step-brother only the winter previous, who—within sight of the rocky
shore at Ogmore—had found the temptations of the newly-opened
Chinese takeaway on the village outskirts irresistible.)
Even after Splott—and an ugly incident with a local dog, who
mistook the waiting Pemmican for a bus tire—the troubles continued.
Repeated demands to see his transfer from the new conductor, more tea
breaks, and a “go slow” campaign led by the driver in support of the
striking miners in the Rhondda valleys all led Pemmican to jettison his
timetable and seek the warming lights of the first Brains house on the
B4265.

Gone were his plans to ascend the mighty desert dunes at Merthyr
Mawr. Cast aside his hopes for trekking the Afan-Argoed Country Park
(toilets provided; a point, he felt, particularly in its favor). Now Pemmican
was reduced to catching the thrice-weekly 828 Local, in which he was
forced to give up his seat to a Welsh Mountain ewe and twenty of her
cousins.

At this point in his narrative, Mr. Hargrove digresses into a vitriolic
account of the supposed relations between the local farmers and their
nominal chattel, but it is evidence of his fair-mindedness that he, too,
acknowledges the attractiveness of the ewe. In fact, so come-hither did he
find her glances, that when the farmer and his sheep got down at The
Sapient Pig on the outskirts of Pen-uchar-dre, Pemmican did as well.
A short brawl ensued. Afterwards, having avenged his honor,
Pemmican took his ease in a ditch near a handy gutter run-off of water
and wept that fellow Welshmen must come to blows. “Nid hawdd heddyw
byw heb wad,” he murmurs. “It’s not easy to live today,” though he
chooses not to translate his repartee with the departing farmer.
Hardened by his ordeal, Pemmican pushed on the following day
until he faced, finally, his greatest challenge: the fiercely xenophobic Mrs.
Tottenham’s unwillingness to accommodate him in the last B&B before
the Ogmore village limits.

In fact, it was at this point, with Mrs. Tottenham in her nightdress
shouting epithets into the wind (only later did Pemmican learn that he was
not the first of the Hargroves to seek solicitude at this particular
door—though, clearly, his Uncle Ethelred was an innocent in any such
affair) and The Blue Anchor long since shut, that Pemmican C. Hargrove
reached his lowest ebb. Reluctant to sleep again on the ground (the
previous night having been passed in the roadside ditch just beyond the
car park of The Sapient Pig), and unable to return home by the route
which he had come (having lost his omnibus transfer), Pemmican found
himself alone and desperately hungry with the threat of monsoon, or
perhaps a steady rain, or at least a mild mist, on the distant horizon
towards the southern sea.

Oh, the woes and worries of the solo traveler! It is at this
juncture—so crucial to his mission, so fraught with peril (not least the
potential for Mrs. Tottenham’s old one to get it in his head to have a go at
the persistent would-be lodger)—that Mr. Hargrove holds the reader in
suspense as he casts his eye back across the shadowed lines of his
lifetime, recalling fondly his days at school, his last view of the village
phone box, and his strong and overwhelming desire for another pint of
Brains Dark. . . .

Of his adventures thereafter, and the clever and unexpected manner
in which he completed his historic journey, I dare not speak, for fear of
ruining a good evening’s read for the future purchaser of this book.
Whilst inevitably in some awe of Mr. Hargrove’s achievement, I
feel it is only fair, as his reviewer, to point out that one or two of his
geographic and cultural observations regarding his route do appear
suspect. As one who is moderately familiar with the stretch of coastline
traversed, I cannot ever recall herds of llamas grazing on the hillsides; nor
are the spires of Rheims Cathedral visible from the Llantwit Major
off-licence at dawn, or indeed at any other hour. Of particular irritation is
Pemmican’s claim to have chatted en route with Ian Rush, the great Welsh
footballer, when any student of the game knows that Rush spent the entire
winter of ‘84 in Benidorm, recovering from a Spanish hooligan’s attack.
Still, Mr. Hargrove’s account of the change-tendering mechanisms of rural
bus conductors and his observation that both lanes on a country road run
parallel, even on the curves, ring true to my experience.

My experience, unfortunately, does not run to a fluency in Welsh, so
I am unable to assess the accuracy of the translations used over the course
of this book. While Pemmican quotes freely from his interchanges with
bus personnel, I failed to understand the significance of “O grwyn balaod
ban wraith: chwid, chwid, chwidogaith,” which he claims means “From
weasel skins I made it: whoops, whoops a-whistle.” Old Ron, when
queried, declined to offer an alternate translation, though once he finished
snorting he did opin that such a saying was probably that of the bard
Gruffydd ab yr Ynad Goch. This bardic name, however, is the same
phrase hurled at Mr. Hargrove upon his abrupt departure from The Sapient
Pig, so perhaps there are linguistic ambiguities involved.

In general (while it seems problematic that a phrase such as “arse
pen-y-bont” means “piffle”), I did not find such glosses overly distracting.
Clearly, a higher mind is here at work. One not beholden to our
mundane, ephemeral view on life and its challenges. As evidence, witness
the fact that Pemmican C. Hargrove is not content to rest on his honors.
Already, by book’s end, the reader finds him contemplating his next great
undertaking: the quest to ascertain the true origin of curried chips—in
which Mr. Hargrove and a friend (Eirlis, the woman who does, from
across the lane) will attempt to ride a cycle rickshaw across the Indian
state of Uttar Pradesh.

One can only wish him well, for it is such people as this that keep
us striving, ever higher, for those lofty achievements which mark out our
species for distinction.

Daniel Gabriel’s memoir, “The Dust of the Roads Behind Us: A Hitchhiking Couple Looks Back” appeared in Issue 14 of Outside In. His published work includes a novel,Twice a False Messiah (Florida Academic Press), a short story collection, Tales From The Tinker’s Dam (Whistling Shade Press), and over 200 stories and articles. He is also a lifelong vagabond traveler who has taken camelback, tramp freighter and third class train through 100 different countries. He holds an MA in Cross-Cultural Studies and is currently statewide Arts Program Director for COMPAS.