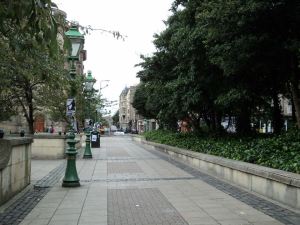 Outside In is trailing along after Udita Banerjee as she makes her first journey out of India to pursue graduate school in Edinburgh. To catch up on Part One, click here.

Edinburgh is unbelieveably beautiful. It seems like I’m in the pages of a book; it’s a complete fairytale. During my taxi ride from the airport to my new flat, I kept seeing all these castles and thinking that I must be in the outskirts of the city or something. I couldn’t be more wrong! The city skyline is dominated by the glorious Edinburgh castle, historic and magnficient. The Scott monument is a close second. It is a different matter though, that every other building, bank, school, college, hospital, either looks like a castle or is one!

The weather? Funny, drizzling for five mins, lots of sun for about twenty, then back to cloudy. But the wind, oh the wind is crazy! People here talk about the weather just because there is always something going on with it!

The biggest sense of culture shock, so far, has been that cars actually STOP for people to cross the road! Back at home, if anyone did that, they’d probably not get anywhere for hours together, as a million people would begin to cross! But the first time someone stopped for me, I stared at him and genuinely thought his car had broken down or something!

The people are amazing, they are patient with newbies, they love their city, and they love you for having come here. They share this great love-hate relationship with Glaswegians, but I can see why now Glaswegians are such a funny lot! They laugh uninhibitedly, they shout and dance, and sing; and can probably do all of that on the streets too! People from Edinburgh can’t, because of the freakin’ WIND!

The University is ancient and crumbly, the walls are dark and damp, you can smell knowledge and age… it’s very overwhelming being a part of it. The dark Scottish architecture is stunning and I have just picked up reading ‘Sunset Song’ — it isn’t representative, but apparently, it tells about some of where all of this city came from. I’m in love with Scotland, and if I can survive the winter ahead, I will surely try and live here at some point, which is more than I can say about Delhi.

Udita Banerjee is 23 year old Indian who doesn’t think much of India. Her closest friends suspect her of being British in all her previous births. She has taken their good advice and is now heading to Edinburgh to do a Masters. No, not in English Literature, in Electronics. She loves tea and poetry, and hates chai, but you might have figured that out by now!