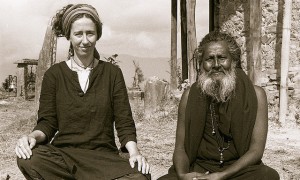 On a beautiful, hot morning, I was meandering through the Nepalese hills and saw shepherds lounging with their herds and women working in the terraced fields. Kathmandu was snuggled below the snowy Himalayan peaks. I breathed in and felt a remarkable sense of freedom.

Walking to the flat top of a steep incline brought me face-to-face with a ten-foot high statue of Hanuman. He is the Hindu monkey God representing devotion, surrender, and an ego-free existence.

About fifty feet behind the monkey god, a large, twisted leafy tree shadowed a disheveled mud hut. I could hear the sharp crackling and snapping of a fire as I approached the open door of the hut. The thick smoke floated around my face, and I couldn’t see inside. I slowly stepped forward.

A low, furry thing grabbed my leg and I jumped. A dog was madly humping my leg. The animal’s need to dominate me broke the stillness. Waves of roaring laughter poured from inside the mud hut. “Come in…”

Upon entering the hut, I could see the grinning, relaxed male faces of my new host and six of his village friends. The host said, “Namaste, me Kali Baba. You welcome. You sitting. You tea drinking? You name?”

Kali Baba had a smoking pipe in his hand. His sparkling eyes lit his coffee colored cheeks and nose. He wore a simple black robe, sort of like a toga, and his long black dreadlocks hung like ropes that reached all the way to the ground. There was barely a wrinkle on his face, and only the gray in his beard led me to guess that he was in his 60s or 70s.

The mystical air about Kali Baba and the smoky faces of his friends made me feel like Alice in Wonderland when she stepped into the den of the caterpillar. Like the caterpillar, Kali Baba was smoking a pipe and looked like a peculiar and wise old sage. He asked me in Nepali, “Who are you?” I knew he was looking for “me” beneath the surface.

Like Alice, I didn’t really have the answer. My life was confusing and everything I thought I knew wasn’t true anymore. How could I have possibly understood who I really was?

The weird feeling in my gut said that Kali Baba had been sitting there waiting for me. A sense of destiny in my cells screamed that something really big was happening and that meeting this person was an epic event. I was somehow born to meet him.

His full name was Kali Baba, but villagers called him Baba for short. Baba was a Sadhu in his early 70’s. Sadhu is another name for a Hindu ascetic or one who lives an austerely simple life and abstains from the normal pleasures of life.

His austerity amazed me. He had a mud hut on a hilltop…no car, no cell phone, no Internet. He sat on the same simple straw mat for hours, everyday, exuding a happiness that I had never witnessed in all my 21 years. Baba showed humor, warmth and lightness in every single task.

His willing acceptance of me, a complete stranger, showed me the meaning of “love thy neighbor.” Was he really human? His joy rippled through the room with a subtle physical vibration that I could feel on my skin or drink straight from the air. I wanted to be as content as he was. My future life seemed to depend upon figuring out his secret. He was a teacher, and I wanted to learn whatever my lessons were meant to be.

Living In The Storage Room

As Baba made dinner for all who were there, I asked him if there was a place for me to stay. His responsive smile directed me upstairs towards the guest room of his hut. I found a storage area without walls that was exposed to the elements. Bamboo posts held up the second level of his grass pagoda roof.

After a few nights of sleeping there, I learned that Baba wasn’t the only exotic presence around. I woke one night to hear what sounded like a kitten coughing up a hairball on a loudspeaker. The magnified hacking and purring made me think that it must have been a wild cat. I gingerly peered out over the ledge of my second story open-air sleeping porch and saw a very large tiger not far from the hut.

My blood rushed, my pulse quickened, and I dropped to the floor. I didn’t know what to do, but I played dead on the ground until I heard it eventually leave. The next morning, I asked Baba why he never told me about the tiger. He laughed, and I realized that mentioning the local tiger would be like an American telling a foreign visitor about the local squirrels in the neighborhood. It wouldn’t happen. I learned that Baba was given an abandoned tiger when it was a kitten. He nursed it back to health and released it into the jungle about ten miles distant. The nocturnal tiger has been visiting Baba’s place ever since.

I tried to avoid going to the bathroom, a nearby ditch in the bushes, in the dark hours. It was bad enough being in a room without walls, knowing that the tiger was prowling about every night.

My Nepali was minimal and no local villagers spoke much English, but it didn’t matter. Baba was a resourceful character and had mastered communicating through bits of English, body expressions, and pointing with his fire poker. He also had his ten phrases that he repeated like mantras during the many months that I spent there. My favorite phrase of his—which was confusing at first—was, “No money, no tension.” I didn’t understand. I thought, “No money, big tension,” but Baba showed me a new way of being.

The Cycle of Exchange in Gifts and Words

Many people from the Kathmandu Valley visited Kali Baba because of his renowned healing powers, his talent for telling enthralling fireside stories, and for his mastery of Nepalese curries and teas. Visitors left gifts of money, food, and holy items like incense, statues, and candles.

Baba returned the energy to every visitor with similar gifts. He would even give to people who arrived empty handed. He loved to give, and he gave so much that people around him wanted to give more to him, thus creating a beautiful, renewable cycle.

Sometimes he had to give because the gifts took up too much space in his hut. At other times, he would have little or no money. Yet, he never stressed, and whatever food or money he needed would appear like clockwork at the right moment…never too early and never too late. This was how Baba lived. I was a fascinated witness, learning from his example that a genuine trust in things working out creates more ease and relaxation when resources are tight.

I believe I was in the larval stage of my spiritual awakening. Like the ravenous caterpillar that grows 100 times and sheds various skins, I digested Baba’s few phrases and shed old beliefs. Living with him fueled me with energy that would continue my transformation for years to come.

Erin Grover specializes in sharing the voices and events of social movements through writing, film, photography, and Internet media. She is an established speaker as a voice for peace and an inspiration for others to dare to face their fears by saying yes to their destiny. She blogs at http://blog.lizgrover.com/.