A steady, strong and chilly wind blows across the landscape making the colourful Tibetan prayer flags flutter noisily as if rapidly reading their printed prayers and sending them hurtling across the world. The cold wind leaves the skin dry and your mouth shut. The ridges and mountain tops, some with ancient glaciers embedded in their folds, stand out strikingly against a cerulean sky. Small puffs and bigger blobs of cloud cling around many of the summits, surprisingly motionless amidst the restless winds that buffet the land below.

It is early morning. As we gather to climb into our dusty vehicles, someone shouts “Ruko, pehle ek foto ho jaye” (Stop. A photo first). We assemble loosely, turn towards the light, “smile”; mixed response, click. Our family group of six plus two kids has been on the high roads of Lahaul and Ladakh for several days now; racing, cruising, slowing, stopping, looking back, chatting, wondering, waiting; with cameras dutifully trying to capture moments and images of the stunning beauty of this vast, boundless mountain-scape.

The roads, hewn across rocky mountainsides, laid smoothly on high plains and cut and filled along boulder strewn valley bottoms seem to have acquired their own rhythms that govern the vehicle’s speed, the gear, the attentiveness and also the expressions on the driver’s face. The vehicle, its driver and the road constantly interplay and even minor misinterpretations of the road’s intentions result in bumps, braking and quick shifting of gears. Sometimes, a muted “Aaista” (slow) from those stoically ‘suffering-enjoying’ the brunt of sudden jumps and jerks in the back seats!

Stops enroute, to stretch, smoke, have tea, eat, take more pictures, find a loo and so forth are welcome, going by the large numbers of travelers seen at most such places. The Ladakhis or Tibetans who run these treeless oases are a cheerful and smiling lot and not without good reason; business is brisk. And the tourist and army traffic seems to be growing and growing. Unlike thirty years ago, when I first bumped along the then ‘Kuccha’ road to Leh, forlorn and uninhabited for the most part, this highest mountain road in the world is bustling / bursting with activity now.

One impact of the greatly increased traffic appears to have scared off Ladakh’s wildlife to remoter interiors. The swarms of marmots and packs of snow cocks are seen no more. We could only sight a few marmots. Wonder where the ‘Kiangs’ (Tibetan wild ass) and the ibex roam now? An army officer informed me of having seen a snow leopard a year ago. But this was at the very end of the line, close to the melting Siachen glacier. Only the Bactrian Tree Pies hopped and showed along highways.

On the fifth day when we finally rolled down towards Leh leisurely, savouring the afternoon sights and sounds of the Indus valley, a cluck of blue clad cops waved to us to stop. “Papers, license?” a cop demanded eyeing the HP registration number of my jeep. In a jiffy, Namgyal our local FP&G was out and engaged quickly with the cops. They asked him a few questions and then the head cop, tail up, flashy sun glasses; sauntered up to me, smiled, shook my hand and said “Himachal people, our neighbours, Go”. 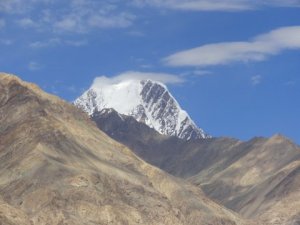 Visiting the several hilltop-perched and enchanting monasteries is a must in Ladakh. These are now cleaner, brightly painted, organized with spacious car parks and have tourists thronging to them like bees to a hive. Entry fees have been enhanced and local crafts and foods are available. Prayer wheels, small, medium and extra large have been appropriately installed and keep spinning out concentric, silent waves of “Om Ma Ne Pad Me Hum”. The monks look happier, rounder and less other worldly.

Like elsewhere in J&K, Ladakh has its share of Army presence. One encounters longish convoys of somber, green-colored army trucks, moving in file with their bodies swaying and lurching as they negotiate stony culverts and swiftly flowing snow melt in streams. The Army presence is said to have boosted the local economy and people get things like “milkmaid” (Not them. It’s sweet canned milk, silly!), and green vegetables even in the dead of winter, not to mention several hours of electricity. Extensive use of kero-heaters to battle sub-zero temperatures does leave that lingering kerosene smell in their quarters, though.

Leh town was bustling. Packed with actively curious tourists and their oxygen starved elders; the markets and restaurants were full. Expectedly, vada/dosa and Guju food is now available at 12600’. Bar-be-cued mutton and seekh kebabs from roadside vendors on the City Center market are a delight, as is the local thupka. The afternoons in Leh can be hot with the ultra-violet rich sunshine boring into you. Fleeing the heat, I discovered a street full of barber shops and decided to get me a crop. The barber spoke chaste Punjabi and on being asked that I wanted a “Lama cut”, he grinned noiselessly, displaying his full denture with two dazzling gold teeth. Then said, “Aaoji, Aaoji, eh taan saada roz da kam haiga” (Come, come, this is routine for us!). I wondered if he knew the current price of gold.

On our second day in Leh there was a scramble for petrol as a fuel scarcity rumor spread. This after every second truck on the highways to Ladakh happens to be a fuel tanker. The mornings in Leh are quiet and luminous as the Sun strikes those hanging around clouds and snowy summits encircling the town. Flights from Delhi and elsewhere come in and depart early as do military aircraft. It is quite a thrilling sight to watch the planes landing and takeoff.

On our way back, we collect some strings of prayer flags from the Passes, to put in our cars in the hope that they will flutter out prayers from heavens above when we race across the earthly plains below, remembering a paradise. 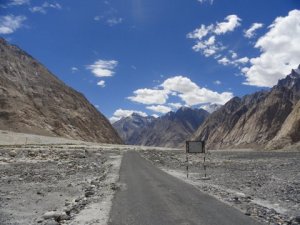 Nodnat is a forester, but has not been a very good one. But he does love to travel and walk the talk. He joined the Indian Forest Service in 1976,  and is now retired and lives in Kasauli, Himachal Pradesh.