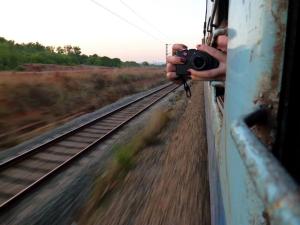 Nature is decorating for the holidays.

Ice crystals crunch beneath my boots, a crisp percussion to winter winds caroling in the trees.

Restless oak leaves rustle, then hush, as the whooshing white pines chime in.

The night promises a waltz of wood smoke, mist, and moon shadows.

–Melanie Griffin
—
Instead of putting up the big Christmas tree this year, we will place
the eighteen inch silver Christmas tree on top of the fireplace shelf
along with all of the presents.  I can see it now, Sofia crushed by an
artificial tree, stabbed by shattered ornaments, surrounded by
shredded wrapping paper and ribbon (motherhood makes one paranoid).
The pretty lights that used to hang around the doorway will have to be
absent, as there is always something new to “baby proof” (most
recently, the coffee table, which Sofia decided to bite the corner
of).  My heart stopped when I first glimpsed the frantic look on her
face due to the fact that she could not release her mouth from the
table, but at least she hasn’t bitten any furniture since.
–Meghan Coronado
—
I scurry across the platform to get into the ladies’ coach of the
Delhi metro and manage to sit as I am hit by the evening sweat smell
of a nearby student. A middle-aged woman sandwiches herself between
the sweater and me, making the space more cramped, more fragrant. I
try to distract myself by texting a friend when I see the woman
peering into my phone, and a short-skirted girl punctures my toes with
her six-inch heels.
–Anam Naqvi
—
This is my couch, my view, the air in my country. This is my puppy — doesn’t he look just like Matilda did when we took her for that walk in the park where you took the picture of me next to the sign that said “No Dogs” in Hindi, when we pretended we didn’t know what it said? This is the sniffle in my nose, from rain and winter and Pacific Ocean, different from the one you heard caused by smog and the smoke from Diwali, a different sickness than when you went to the chemist-who-wasn’t-a-chemist for me after we forced ourselves famous at the film festival on the beach in the jungle, where we bought a hundred “coral” bracelets for nickels and shook them up and down our arms. This is still 2012, my friend. Tell me: how does the future look?
–Brandi Dawn Henderson,
on Skyping with Susanna Wickes during the gap
between the Western and Eastern New Year.