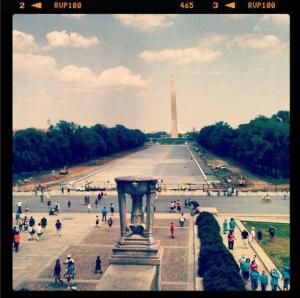 I never did much traveling,
but I did travel some, one slow summer,
in the supposed Masonic Capitol of the New World (Order).
I saw the cracked obelisk that stood with no
reflection, in memorial, with you

by my side, my weeping Willow,
willowy friend, who rose out of the sea
of unfamiliar faces, pouring out of the
metro gates, a new Aphrodite born
from the roots of Redwood with lips that taste like juniper berry,
that tell me no one here waits at the top of
the escalator, like in the movies,

but it was so sweet that I did.
I say show me your world and we witness
the two faces of the district. I see there was
no hand from God in the Glory of man,
Reason and Rhetoric were made new gods, and their images were
painted in Roman fresco out of statesmen and
diplomats. I wonder why there are no

tall buildings downtown, not like New
York City, not like Chicago. You tell
me there is a worry of snipers in this
city when buildings get too high.
This city is filled with important people,
more than just the daughter of a redwood tree,

that is crowned with laurel leaves. You show
me a city that dies every night when
the suits all shuffle silently, en masse, across
the Potomac River when all the work
is done, over moules et frites and rosé we watch a city born
again by the light of the setting sun on U
street, where hipsters and trannies walked the

same streets as you and me, on the
way to Wonderland (the bar) where you
say: This place reminds me of home.

Mark Burr is a poet residing in historic Columbus, MS. He studied under the poet Kendall Dunkelberg. He likes squirrels, J.D. Salinger, Sylvia Plath, and movies about weird people. He is originally from Ocean Springs, MS.