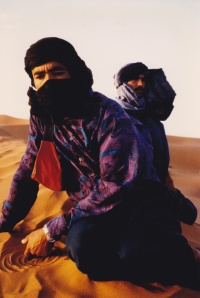 The not-boyfriend drops me off at the airport.  He says, I don’t want you to leave.  He is lying.  In the reflection of his sunglasses, I am very small.  On the airplane, screens indicate the direction of Mecca and men pray in the aisles.  I am going somewhere.  Anywhere.

In Marrakech, a guide leads me through a maze of streets to a carpet shop.  I long for a kilim with faded red stripes and pale yellow diamonds, worn thin by leather slippers.  Over mint tea, I hand the shop owner three $100 bills.  He praises me: You bargain like a Berber woman.  I have been cheated.

I eat orange-scented cookies called gazelle horns.  They are crescents, mimicking the moon above.  In the medina, teenage boys in soccer-sloganed t-shirts call me gazelle.  I now move quick and graceful, a wild animal on city streets.

On the Djemaa el-Fna the assistant snake charmer proposes to me.  But I am saving my heart.  I want the snake charmer to make me dance like the cobra writhing out of its basket.

Blue-scarfed Tuaregs sell fossils and desert roses.  Swords at their sides.  I imagine them holding me captive in a desert kasbah after the not-boyfriend has died from typhoid.  Cutting off my tongue and forcing me to entertain tourists.  These are not entirely unattractive scenarios.  When I leave Marrakech, I leave my books behind.  I have lived too much in books.

In a desert market town, I sit in a cafe before a saint’s mausoleum.  I cannot enter: I am doubly forbidden.  The call to prayer dissipates into purple twilight sky.  Under a faucet near the mausoleum’s arched door, a man washes his hands, feet, and face.  The Australian backpacker I met on the bus tells me that Muslims must wash with water or sand before praying and they can pray anywhere: the whole world is a mosque.  There is no distinction between the sacred and the everyday.  Under the table, I rub my palms together.  I try to pray.

The truck disappears in heat mirages; I wonder how we’re going to get back to the hotel.  But the Australian says, come and I do, though a palmery to an abandoned kasbah.  Wind and sand has melted crenulated adobe.  We find an entrance outlined in whitewash, an eroded staircase.  He climbs.  He wants to find the highest point, shout at the sky.  Again I follow, stopping only at a landing worn to a ledge as thin as my courage.  Two stories down, the ground is packed dirt.  The Australian holds out his hand.  Trust me.  I take a breath.  I place myself in his hands.

We travel further into the desert, to an emerald-green date palm oasis.  In the guesthouse garden, under a rising half-moon, the Australian shares a half liter of vodka.  His fingers brush mine as he passes the bottle.  I kiss him.  I take off his shirt.  His green eyes sear me.  This is the vacation me, the gazelle.  I am greedy.

The sun rises over the red dunes of the Sahara.  It’s hard to walk here; I dig my feet deep to avoid sliding backward.  A beetle’s trail meanders up the dunes.  Small objects make a great impact.  The Australian leans back into the sand, his blonde dreadlocks fanning his head like Medusa’s hair.  He is going to Timbuktu, Iran, Central Asia.  You’ll forget me in a week, he says.  I laugh.  Fat chance, I say.  Come meet me this spring in Tashkent, he says.  I don’t know where that is.  But I say, Sure.

The not-boyfriend does not pick me up at the airport.  I come to his house wearing silver bangles like a Tuareg bride.  Why didn’t you bring me a t-shirt? he asks.  He wants me to cut his hair.  I tell him about the Australian.  He calls me a Milosevic.  I wield his silver scissors and curls fall to the carpet.  I turn into a gazelle.

Lori Sambol Brody’s home base is in the mountains of Southern California.  Her short fiction (all of which reflects her travel experiences) has appeared in The New Orleans Review, Red Rock Review, flashquake, and 13th Moon.