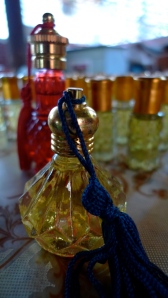 As we made our way to the back room at La Palette, the Parisian bar we’d been coming to since the eighties, a boyish waiter approached our table. We pointed at the portrait on the wall of a youngish François, the gruff waiter who used to serve us, and asked about him.
“Oh, he’s retired now,” our serveur answered, “though he does still stop by from time to time.”
“We knew him when he looked like that,” I said, pointing up at the slightly caricaturistic portrait, painted by a regular as a gift to the bar, possibly in lieu of a mounting bar debt, I guessed.
La Palette was a favorite of our expat friends, who spent many an evening – and many a franc – drinking in that very room, nurturing a kind of love-hate relationship with François and with French people in general.

Now, even the francs are gone and, as I looked up at the painting and then across the table, I laughed –Impossible! – at the thought that we, too, must look thirty years older.

A bleak never-ending wilderness stretches out before you. The ground is nothing but ash. You keep putting one foot out in front of the other. You stop and look over your shoulder. Nothing there.

At night, the cool breeze of the Mediterranean would die long before it wound its way up the tin roof-dotted hillside and into my room overlooking the gritty outskirts of Nice, its only remnant – the salty humidity – settling like a wet blanket over the thin bed sheet and making sleep a damp and fitful affair. Until it came, I was alone with the objects I had chosen to co-inhabit the square yellow room. A petite clay santon doll wearing a calico apron and the weather-beaten face of an old Provençal peasant watched me each night from a small shelf on the opposite wall, a stoic observer to the percolation of the storm brewing within me.  At eight inches, she towered over the objects on either side of her simple dress, both of which had witnessed as much as her but without the mocking pretense of empathy: a tiny gold bottle of perfume painstakingly selected between sniffs of coffee beans in the perfumery gift shop, and a jar of creamy lavender honey, sensual even in the coarse hands of the farmer who sold it. These scents, encased in glass and metal, reached somewhere deep within me when I was aching for something – internal fortitude, to know and be known – and each evening’s indulgent inhalations lasted longer than the ones before, like a teenager alone in her room with a can of spray paint.

Don’t try to control the astral plane part of it my spirit guide said, simply listen to the soul of yourself.  Which is the same soul in all of us.  The sublime in you is what’s in common with me.  We th*i*nk the same way about anything when we th*i*nk with our internal God.

I saw a woman in an Omani mall today. She wore a veil. I could only see her eyes. She was walking around with an ice cream cone. I wondered about it all.
–Khadija Ejaz