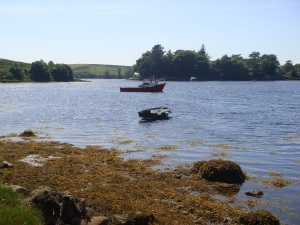 Haskell stands in tea-stained water,
the whole world brown and rust and olive,
throwing out his line, moving forward and back,
skiff still at anchor, battered, oars protruding
worn and dark where his hands have marked years,
bow deep and pointed. His line knits him to the sea.

I remember pulling a fish from still water,
scales bright in the early morning sun,
hook buried deep in the gut.
How we take things from the world matters.

Today, he will hold the fish
firm against worn boards,
and scales will jump, leaping in the air,
blood pooling. Flesh parting, white and firm.
Later, fish heads fill the crab trap, and Haskell,
this old man, gives thanks.

The sun cuts a path over the water,
clear as a marking on the map.

Jill Gerard lives and works in Wilmington, North Carolina, finding inspiration in the land, the places where one world bumps into another. In addition to her work as writer, she teaches (both young writers enrolled in the Center for Talented Youth at Johns Hopkins University and at the University of North Carolina Wilmington) and co-edits Chautauqua, a literary journal. Her poems have appeared in Eclipse, Sojourn, Comstock Review, Hawaii Pacific Review, Ars Medica, and other journals. Finishing Line Press published a chapbook of her poems, Something Yet Unseen.