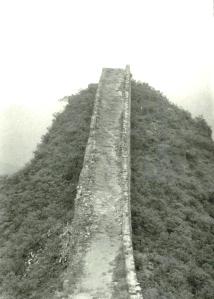 It was after the first crumbling turret that they started following us.  “Careful.  Be careful.  You go too fast.  Danger.  Bottle water?”

We had dashed to leave the group behind and the two women appeared out of nowhere.  We pretended not to speak English, but they knew.  We showed them our canteens, but they persisted.

Tamped earth and pieces of auburn brick ground underfoot as we raced to find solitude in the mist.  We didn’t want to be tourists and so we refused.  Hearts racing we felt the terror of pursuit when the wall failed.  When we thought we had eluded them we hid in a deteriorating battlement.  Crouched together out of breath we listened.

I cried out when her hand appeared at the opening.  She smiled.

We ignored them and eventually they retreated.  It is only now that I realize it wasn’t a matter of defeat.  I wish I’d been nobler and seen the enemy for who she really was: my denial of place.  I wanted an experience unadulterated by the cheerful chatter of need.  I wanted to take my partner’s hand and pretend that we were alone in the pureness of a foreign landscape.  I was annoyed by the village women and so I missed the chance to pause and be present in what was real.

By not buying a bottle of water I missed the chance to stop being a tourist.

Born and raised in Iowa, Laura Story Johnson has lived in New York City, bush Alaska, Mongolia, Boston, Austria, west of the Zambezi River in Zambia, and in Chicago: http://www.laurastoryjohnson.com.