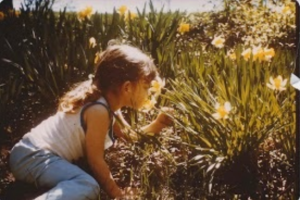 The waste of countries across oceans, sending it smoke-bound
into the sky, allowed to irradiate its land of mild poisons.
Beware the boysenberry in the jam, the milk in the gravy.

The history of cold war, cold fusion, here in this temperate forest
where icicles never last. It opens its children’s books to page 94,
citing our important part in ending the war without saying exactly how.

The bodies of drunk former prom queens spun out under the shallow,
man-made lakes, too late to make it home. Young men
grown thin and toothless in their thirties. All of them covered in thistle.

And when I visit now, my own home plowed under, flattened,
old roses and daffodils unearthed, a fox stops to watch my car
creep along the curve of my old driveway, but finds nothing of interest.

Jeannine Hall Gailey recently served as the second Poet Laureate of Redmond, Washington. She is the author of four books of poetry: Becoming the Villainess, She Returns to the Floating World, Unexplained Fevers and coming out this next spring from Mayapple Press, The Robot Scientist’s Daughter. Her work has been featured on NPR’s The Writer’s Almanac, Verse Daily, and in The Year’s Best Horror. Her poems have appeared in The American Poetry Review, The Iowa Review and Prairie Schooner. Her web site is www.webbish6.com.