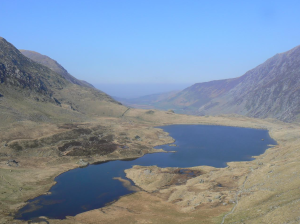 My feet dangled 125 feet above the ground. I sat on a perfectly angled stone seat shaped by centuries of rain, wind, and changing temperatures. The mountains behind me — the tallest in England and Wales — cast massive shadows over the burnt umber and emerald patchwork valley below. From this height, a shimmering lake was reduced to a mere puddle and lichen-coated boulders to pebbles. The panorama of Snowdonia National Park stretched for miles on this clear, sunshine-filled March day, a rare event in soggy North Wales.

I was attempting to conquer the glassy Idwal Slab of Snowdonia’s Glyderau mountain cluster — a rock face named for ancient kings. I was now one-third up route Charity, with the climbing routes Hope and Faith by my sides. When I joined the mountaineering club at the University of Leicester two months earlier, I had never even gone climbing before. I had never imagined being tethered to the side of a mountain, looking down at the ground from such heights. Yet here I was. An intimidating 300 feet — two climbing pitches (lengths of rope) of the three-pitch climb — remained.

I set my backpack on the small square of space between me and a slushy pile of snow to my left, and clutched my camera. If I dropped it, I would be unable to capture the perfection of the scene before me. I put all the hope and faith I could muster into the 10-millimeter-gauge rope that served as my lifeline. A few meticulously tied knots and my borrowed climbing harness were all that kept me and my camera from plummeting to the ground below.

As I took in the view, Gareth was making his way up the second pitch of the climb. Despite the chill that prompted him to don his orange beanie and red puffy jacket, his pants were rolled up to just below his knees. To help him better grip the rock with his climbing shoes, he was also sockless. He and the other British friends I made through the mountaineering club seemed immune to the cold dampness. After only a couple months studying abroad in England, I was not yet accustomed to the weather. I slipped on my gloves. We all spoke the same language, but I was still a foreigner in a foreign land having a foreign experience.

Gareth’s girlfriend Rachel stood a few feet to my right, looking up at him as he strategically shoved small metal wedges, called nuts and cams, into cracks in the rock. The protective gear was attached to nylon lanyards that were hooked to Gareth’s rope with carabiners. If he fell, these metal pieces were designed to remain wedged in the rock to shorten the length of his fall. Rachel let out bits of rope from her belay device as Gareth led our climb to the next pitch. A few minutes later, he safely anchored himself to the rock and took over the belay controls.

It was my turn. Like a child clambering up the sloped surface of a slide, I continued my climb up the second pitch of this slanted, slippery rock. I searched for cracks, any potential hold that I could grip with my chilled hands. There weren’t clearly defined markers directing me like there had been in the climbing gym. I kept grasping for holds that would make me feel secure, that could convince me I wouldn’t slip once I fully shifted my weight. Without ledges to support my feet, I was forced to trust the friction of my rubber-soled climbing shoes against the polished rock.

Five hundred million years ago, this rock and the mountains around me lay at the bottom of the sea. Over time, sediment filled the sea and tectonic plates collided. Spewing lava formed volcanic rock and transformed the rock that was already present. The pressure of the collision pushed the seabed upward into a massive mountain range. Millions of years later, gliding glaciers carved the U-shaped valleys before me. Wind, rain, and ice eroded and polished the rock surfaces.

The rocky land resulting from this geologic turmoil has, in turn, supported six thousand years of human habitation in what is now North Wales. Stone Age humans fashioned Snowdonia’s rocks into some of the earliest tools. During the Industrial Revolution, the Welsh dug quarries and pulled Snowdonia’s slate from the earth for roofs, mantelpieces, and gravestones. The flourishing slate industry faded and the Welsh chose conservation over mining. These quarries are now silent. Now Snowdonia’s soil supports agriculture. Its beauty attracts tourists, walkers, bikers, and climbers like me.

Many Welsh “have been brought up visiting such places and caring for them, treating them with respect,” says Simon Woodhall, a Welsh geography student and friend of mine from the University of Leicester. Woodhall explains that to be Welsh means to identify with Snowdonia — to take ownership and responsibility for the preservation of its history, culture, and natural beauty.

I could see more of that beauty after I finally scrambled up the last few feet of route Charity’s third and final pitch. My hands ached from repeated contact with the cold, wet rock. I pulled my lunch from my bag and rested my exhausted body on ground blanketed by soft moss and grass. The view from the top was even more impressive than the one from my cold stone seat 300 feet below. Sheep speckled the valleys that led to the Welsh villages. Winding streams and fences of interlocking stone looked like ribbons draped across the countryside. A light haze kept me from seeing any farther than a few dozen miles, but I imagined that Snowdonia’s 823 square miles of mountains, lakes, valleys, forests, and coastline (one-tenth of Wales) stretched on in equal beauty. Climbing this rock face made me feel like I had become a part of this place, yet my visit was only a blip on Snowdonia’s extensive timeline.

Sarah Lichtner is a science writer in the Washington DC area. While she still occasionally climbs in the gym, she has yet to return to real rock since her Snowdonia climb more than seven years ago.