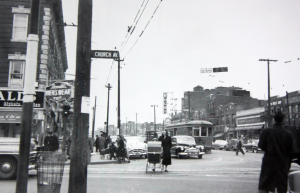 The electric trolley clanged, making its way on steel tracks up and down Church Avenue, past rows of stores on both sides of the street. Wooden display stands spilled onto the sidewalks, overflowing with merchandise of every kind: salami, pickled herring and lox, bagels, rye bread, sponge cake and challah, dresses, shoes and underwear, hammers, nails and yarn for knitting and sewing. The Jewish immigrants who settled our neighborhood in the mid-1930s, had replicated the villages they left behind, where the marketplace was the center of activity. Within five short busy blocks along Church Avenue, from East 93rd Street to East 98th Street, local housewives could find whatever they needed to feed their families, manage their households, and even amuse themselves in the few moments of leisure they could carve out of their tiring days.

The trolley running down the middle of the street was an American addition. It took half an hour to ride the full length of track from our working class neighborhood all the way to upscale Flatbush Avenue. I later learned the distance was a mere two and a half miles, but  it seemed far away, and in all the times I rode the trolley, it never occurred to me to question the name of our street, even though there wasn’t a single church anywhere in sight.

Church Avenue pulsed with activity. Each of the shops was owned and operated by a refugee who, like Momma and Dad, was born in a small Russian or Polish settlement and spoke in a mixture of Yiddish and English. These merchants, who developed personal relationships with their customers, were proud of their wares. The shoppers had grown up watching their mothers haggle with tradesmen in the shtetls of their childhood, and brought this well-honed skill with them to the Lower East Side of New York. Now, as first-time home owners and meal providers in our working class neighborhood in Brooklyn, they put their bargaining expertise to good use. Every purchase began with a prolonged negotiation.

When Momma entered a store, a flash of respect lit up the wary faces of shopkeepers who often said, “Lady, you drive a hard bargain.”

Many afternoons I walked with Momma from store to store as she made her daily rounds, starting with Sam, the produce man, a big bear of a man with a booming voice and a ready laugh. Sam’s shelves brimmed with wooden boxes of fresh vegetables and fruit. He kibitzed playfully as the women picked over the peaches and plums, pinching each one, testing for ripeness, hoping to find the best he had to offer.

With a wink and a laugh, he’d say, “You know, if you squeeze that peach any harder, the pit’s gonna pop right out.”

Momma usually began with a challenge. “Sam, how come you’re charging so much for the Macintoshes? Look at these bruises. Who would buy such fruit? With the prices you charge, the least you can do is throw in a bunch of grapes at no extra charge. If you do, then I’ll take three pounds of the Macs. What do you say?”

“Wait a minute, Mrs. H.” Sam feigned injured feelings and lifted one of his prize examples for Momma to see. “Take a look. My apples are beautiful. If you only knew how little profit I’m making. Next to nothing. A few pennies, no more.”

Watching Momma and Sam, I understood that they enjoyed the back and forth, but the haggling made me uncomfortable, so I usually stepped outside to wait for her. When Momma was ready to leave, Sam never forgot to call out, “See you tomorrow, Beebee.”

On Mondays, I walked to the Church Avenue Library, built when the city combined two abandoned store fronts next to Barney’s Variety Store. The long, narrow space was jam-packed with books, arranged in alphabetical order. Every week, as soon as I opened the door, the librarian, Miss Johnson, reached under the wooden check-out counter and pulled out three books she had selected for me to read that week.

“Beatrice, I think you’ll like these. Let me know what you think next week.”

Although I never questioned her choices and always checked out the books she gave me, I spent the next hour browsing among the shelves, searching for a few more to take home.

I loved the quiet of the library, the scent of the books, but even more, I loved Miss Johnson’s hushed voice when she spoke, pronouncing every word perfectly, like the teachers at P.S. 219. I tried to memorize the sound of her voice so I could learn to speak that way. Miss Johnson was the only adult I knew outside of school who read books and talked to me about them.

Every Tuesday and Thursday after school, I walked to East 95th Street where a sign on an iron gate outside a brick house read, “Workmen’s Circle/Arbiter Ring Labor Organization: Meetings and Children’s School.” I made my way down the steep concrete steps to the cellar door. Opening it was like stepping into another world. I wondered if this was like the world Momma and Dad had escaped, a world I had heard them talk about in Yiddish with their friends, assuming that the children did not understand. They didn’t want us, born in America, to hear about the hardships they had endured in the Eastern European villages where their lives began. Now at the Workmen’s Circle/Arbiter Ring School, I was learning the language and soon would be able to understand everything they said.

In that dingy, windowless basement room, a bearded man, newly arrived from Russia, stood in front of six rickety tables and tried to teach the Yiddish alphabet to a few mostly badly behaved neighborhood kids. He spoke no English, had no idea of how to relate to American kids who would rather be outside playing stick ball, and commanded none of the authority we invested in the public school teachers we believed knew everything our parents didn’t. On and on he droned, in a language his students had no interest in learning. Most of us busied ourselves by doodling or drawing cartoon caricatures of him, with his long black beard and embroidered skull cap.  Sitting on a wooden bench, as I wrote the strange letters in my notebook, I struggled with whether to join the group’s pranks or to pay careful attention and master the language of my parents and grandparents.

On the way home, I always wanted to stop at the store that was the favorite of all the neighborhood kids, Herman’s Candy Store. Herman, the owner, stood behind a long counter piled high with open boxes of penny candy: chocolate covered almonds and marshmallow twists, strings of black licorice, pink, green and yellow sugar dots lined up in perfect rows on long rolls of white paper, tiny wax bottles filled with sweet, gooey syrup, and gummy jujyfruits that stuck to our teeth.

Whenever a group of boys streamed in, Herman’s eyes darted in all directions, scanning nervously to see if any of them would snatch some candy and run. If that happened, and it often did, red-faced and enraged, he raced out and chased the little thief down the street. As the boys fled around the corner with the stolen penny candy, they mocked in sing-song voices, “Herman the German, Herman the German,” the worst of all epithets in a Jewish neighborhood in the 1940’s. Herman soon stopped the pursuit and rushed back to the store shouting over his shoulder, “I’m gonna tell your mother. She’ll give it to you real good!” The boys weren’t worried. They felt free to harass him, knowing their parents didn’t like him either.

Herman kept a refrigerated glass box on a counter, open to the street. He filled it with cups of charlotte russe: chunks of yellow sponge cake topped with a mound of strawberry flavored whipped cream, crowned with a red maraschino cherry. Each confection sat in a shiny, white paper cup with scalloped edges and cost ten cents. When Dad walked with me to the candy store, he always bought me a charlotte russe. While I concentrated on licking every bit of cream to get to the yummy cake underneath, he talked to Herman about President Roosevelt, politics, and Israel. I loved the kind, friendly way Dad spoke to Herman, and hoped Herman knew that I was not one of the kids who taunted him or ever took candy without paying.

Across the street at the corner of Church Avenue and East 94th Street, was the Drug store. My parents and the other adults in our neighborhood saw little distinction between Mr. Pressman, the druggist, and a medical doctor. As far as they were concerned, his pharmacy school education elevated him into the realm of “doctor,” far above the other shopkeepers. When anyone in the family felt sick, our parents consulted “Doc” Pressman first. Why call a general practitioner and pay for an expensive house call, when his opinions and diagnosis were delivered with confidence and conviction, free of charge?

Endless rows of wooden shelves lined the walls from floor to ceiling, crammed with patent medicines, thousands of bottles, boxes, containers and cartons.. A bitter medicinal odor seemed to seep from the dark paneled walls.

Mr. Pressman knew exactly where every one of the thousands of items was stored.  As he opined in an authoritative voice about the newest remedies, he slid a tall wooden ladder on its wheels along the wall until he spotted the item he wanted, then scrambled up to retrieve precisely the right solution to his customer’s medical needs.

I watched as he stood under a bright green PRESCRIPTIONS sign, opening packets and pouring mysterious powders into a large stone mortar, grinding and crushing them with his heavy pestle.

Part of the magic of Pressman’s Pharmacy was the coin operated scale outside the entrance. Large black letters across the front of the upright scale announced:

LEARN YOUR WEIGHT AND YOUR HOROSCOPE: 5 CENTS

A coin-operated fortune telling machine! Every time I passed it, my heart raced. Once, I took a nickel with me and stepped onto the heavy iron base. After looking around to be sure no one was close enough to see my weight or my fortune, I inserted the nickel and held my breath. A few clicks, as the coin made its way down the concealed interior compartments, and out of a slot on the side of the scale popped a small, white card. I held it in the palm of my hand, and cautiously read my fortune: You are heading in the right direction. Thrilled, I ran home and hid the card in my dresser drawer where it remained for many years.

In our “urban shtetl,” every shop was owned by someone I knew, a familiar adult wherever I turned. Herman, guarding the candy store, Miss Johnson sorting her books, Doc Pressman instructing in the pharmacy, and Sam calling out, “Hello Beebee” whenever I passed his produce stand. In my ghettoed world, I was safe.

Within a few short years, the direction of my life shifted. Like so many children whose families come to America to find a better life for the next generation, I realized that for my own future to unfold the way I envisioned it, I would have to leave the immigrant world of my parents and cross the bridge out of Brooklyn.

Bea Epstein is a writer and psychotherapist. Her stories have been published in The Connecticut Review, Potomac Review, The Storyteller, Story Circle, Passager, Poetica, Pegasus Review, Long Story Short and other literary magazines. Bea was a finalist for the Brooklyn Nonfiction Literary Prize, 2013. One of her memoirs was published by Live Wire Press 2012. Her work won Honorable Mention in the National League of American Pen Women Literary Competition.