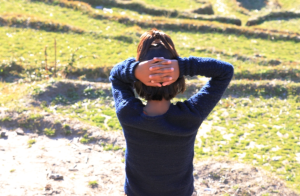 As days drew nearer to my month-long trip to a village called Kalap in the Himalayas, my feelings about quitting my desk job grew stronger. I had been contemplating it for a while but did not yet take any serious steps towards leaving the job. Liberal work-from-home policies at my workplace ensured freedom but on the days I had to go to the office, I could not but feel being constricted inside the cubicle. If I did leave my job, I would have no backup plan on the monthly mortgage payment for the house that would tie me down for ten years. I had only finished one year of the mortgage and nine remained.

Just one day short of my trip, my brother called me with news that my father had fallen sick. He had had a surgery to remove his infected kidney a year ago and now he was experiencing pain in his abdomen. Pain so aggressive that he could not walk straight. He was to be taken to the doctor. And I’d be high in the Himalayas with no access to phone nor internet for a month.

Those were the circumstances in which I boarded the bus to Kalap – a tiny settlement in Garhwal Himalayas. Anand Sankar, who has a responsible tourism initiative in Kalap, agreed to host me for a month. Having my basic cold protection gear covered, I still had to buy a sleeping bag which I did at a store called Cliffhangers located in the narrow side streets of Dehradun. I explored the streets of the town that was known as the boarding school capital of India and home to hundreds of schools. The Doon valley, Dehradun, surrounded by hills, was experiencing unseasonal rains in March.

The rain delayed my trip from Dehradun to Kalap but when I eventually left in a rickety bus early in the morning, for a five hour journey, there were no signs of rain. The bus crawled through the windy mountain roads flirting dangerously close with the gorges. I met Guddu, my minder in the village for the duration of my stay, at a dusty mountain town called Netwar. With his incandescent smile and hair curls bleached golden by the mountain sun, the amiable Guddu immediately inspired confidence in me about the trip. I was practically a stranger, but that evening, over home-cooked meals and the drone of his children studying, we got to know each other slightly better. Guddu’s children, like children in other mountain villages in the vicinity, went to school in Netwar – the only school available for miles in any direction.

The next day, we began a 5-hour trek to reach his village high up in the mountains. The trek, through an unpaved, boulder strewn, steep mountain path made me thirsty while the sun beat down heavily. The weight of my backpack pressed me down and threatened to crush me but I persevered and arrived at the village to the curious glances of village kids who, upon sighting me, a stranger, joined their hands in respect and said ‘namaste’ as a welcome gesture.

After reaching Guddu’s house and getting acquainted with it, I quickly fell into a routine. I spent my days reading and writing on the sun deck of Guddu’s wooden house overlooking the valley. I accompanied him to his field along with his horse to spread manure before the onset of the sowing season. I took long walks and tried to identify the plants and bird life around the village. On these trips, I mostly stood glued to the grand vista of the mountains, its terrace fields, while the deafening roar of the Supin River way down in the valley played backdrop to this setting.

I met strangers in the village and accepted invitations to visit their homes. Sometimes, I was taken to their kitchens, dining rooms, or halls and fed sweet, milky tea and whatever else happened to be on their menus.

I became the official photographer for the village’s Holi festival and, by the end of it, although I survived without being doused in color powder, my camera bore the brunt. I helped make Gujjia – a Holi special that’s like a sweet calzone. Its deep fried packets of dough are filled with a roasted mixture of semolina, desiccated coconut, jaggery (a traditional sugar) and raisins. By the end of it, Guddu’s wife, Pathuli – meaning butterfly in the local language – had thawed towards me after witnessing my able handedness at rolling and sealing the Gujjias. I asked extensive questions about what grew in Kalap and what didn’t, what kind of fruits could be cultivated, and compared their food with that from the plains. I also became accustomed to Guddu, Pathuli, and the other villagers switching to the local language in the middle of a conversation, unmindful or uncaring of my presence.

In all this, I forgot that I had an alternate existence – an existence that is punctuated by staring at different screens for ego-inflating status updates in social media outlets, a liberal dosage of pop culture consumption, and I also forgot about my sick father.

I watched myself in the mirror, the magnificent hills framed behind the reflection of my overgrown facial hair, gaunt face, sunken eyes, tanning skin, and cracked lips that needed moisturizing. In the cold, I rationed my shower to once in two days. My toiletries bag sat untouched, unused. I went to bed and woke up based on the sheer diktats of my body clock. The hand-drawn calendar I brought from the plains to keep tab of time, like all gadgets up here, also sat next to my bed, abandoned.

Most of the time the loud conversation of the villagers – which sounded like yelling at each other to my untrained ears – interrupted my silence. Even so, the rhyming dialect of Uttranchali was oddly comforting to my senses. It characterized the mountain to me – its cadence like the deep blue expanse of its skies, the whooshing of wind through its cedar trees and the chirp of the birds.

I tried to make Rotis, the Indian flatbread, without a rolling pin in Guddu’s kitchen, learning the tricks of it from Pathuli.  She said, by way of instruction: take a bit of dough, roll it by hand and flatten it, pinch it round with the thumb and slap with both the palms to stretch the dough into a perfect round shaped roti. At best, I could only make ragged edged Rotis.

At night when the sky was clear, I sometimes stepped out. The gazillion stars in the sky resembled a crowded Indian railway station with numerous tiny stars and constellations jostling for space with each other.

Sometimes I saw raging forest fires in the night – bright orange and red flames spreading across the forest at a distance. But the icy cold night extinguished the fire, no matter how widespread, and normality returned in the morning.

The unpredictable weather in the mountains ensured drastically different days. One day the sky was clear blue with sunshine, while on the other, streaks of dark clouds obstruct the sun throwing out only weak sunlight. Some days thick grey clouds billowed past and a blanket of cold rain came down with occasional hail or snow falls.

All this notwithstanding, the predictability of my life remained the same. My dad’s illness did not vanish as I did momentarily from their lives. He was now prescribed to undergo two surgeries – one to fix the hernia and the other to remove his stone-infested gall bladder. Both keyhole, albeit. The world has been just as I left it. But I have changed a bit – adapting a bit of the matter of fact, yet laid-back, attitude of the hill people.

I knew this couldn’t last forever. Oases do not a desert make. While Guddu and Pathuli secretly longed for a life in the plains, I longed for more time in the mountains.

When I rejoined work, a month later, I felt something inside me was is bottled up. Where before I negotiated craggy, bridled, forest path, I now climbed concrete stairs. Where I’d lifted my eyes for tumbling vistas against the backdrop of deep blue sky, I now lifted my eyes to see cubicles and torsos hunched over laptops. I sent my resignation in less than a week of my return. I traded a reasonable paycheck for wide open spaces, fresh air, opportunities, and a financially dicey, extremely uncertain career of freelance writing. Wherever I go in this new phase, at least I will be certain that I wanted this.

Prathap is a freelance writer based in the South Indian city of Bangalore. He quit his desk job recently to travel and write full time. His area of interests include solitary, sustainable, offbeat travel and organic living . His travel articles have been published in various Indian publications. He blogs at https://thesunlitwindow.wordpress.com/.