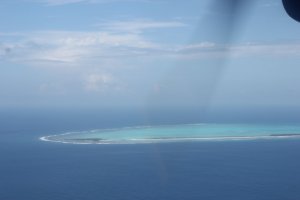 As our plane droned over the Arabian Sea, way in the distance, a tiny speck began to take the shape of a green blob. Through the rounded, oblong window of the plane, slowly the green blob became discernible as a tiny island. A little later one could see the island surrounded by a vast, clear, blue lagoon whose azure water stood many shades lighter than the deeper colour of the sea. As we neared the island, more details zoomed into focus; a dazzling ring of beach encircled what appeared a fully canopied palm tree paradise. At one end a short runaway became visible. The plane tilted in to land and the island disappeared only to come into view again as brown grass and sand flashing by till the plane slowed and taxied to a halt. One could feel the sunshine inside.

Even by Lakshadweep standards, Agaati is tiny, a mere 4 sq km including the ring of beach. It is shaped like a small gourd, with most of the narrow end taken up by the airstrip and so out of bounds for the locals. A beach resort next to the airport had recently been shut down due to a row over the contract fee with the administration. For tourists, Indian and foreigners alike, only a few expensive private guest houses were available, if you did not manage a room in the sole government guest house.

This tropical paradise from the air is very different on the ground. There is a ten-foot-wide concrete road running through the middle of the island from the airport to the northern tip. At several points this arterial road has similar concrete but narrower branches leading to the many hut clusters like the veins of a leaf. Below the thick canopy of coconut palms is a world teeming with people and their habitations. One estimate put the population of the island at 10,000; giving the place a population density of over 3,000 per sq km, very high even by Indian standards. There are no distinct villages as such, only clusters of huts with a few pucca, concrete buildings. Electricity supply, diesel generated, is apparently sufficient for the islander’s needs and freshwater is treated underground water. Visitors stick to bottled water. There is a hospital, several primary schools and one large senior secondary school. The social and cultural life in Agaati is seemingly dominated by the huge, central mosque located almost in the middle of the island. There is television but no movie theatre. Barbers are expensive, given the Muslim penchant for stylishly trimmed goatees.

Being overwhelmingly Muslim, there is no bar nor booze shop on the island. At Kochi we were told that no alcohol can be carried to Agaati, but the customs fellows were apparently trained not to notice any bottles in the baggage. This was confirmed by several discarded whiskey and beer bottles thrown behind our guest house. Ahmed, a boyish looking waiter at the guest house was, however, very helpful to alcohol starved tourists, provided you talked to him alone. Being law abiding citizens, we had landed in Agaati with only one bottle of wine, which we agreed to reserve for the last dinner. Three long evenings stretched ahead and so a few discrete enquiries led me to Ahmed. Not knowing a word of Hindi and only a few of English, Ahmed quickly got the point and led me a shack a little away from our guest house. It was getting dark.

It was darker as we entered the shack. The place reeked of fermenting coconut juice, just the sort of den where they would make deadly hooch, I thought. The man came out with Ahmed and said he had only fresh coconut milk, no fermented stuff. Ahmed and the man, however, kept up a rapid fire question and answer session and in a while the lady of the shack turned up with a sort of bucket she said was two days old. The man said this won’t be strong, only like mild beer. Good enough. Ahmed quickly filled the two empty bottles of mineral water he was carrying and we headed back. The next thing was to have it: quickly, neatly, and without letting the ladies know. It turned out that the stuff was even milder than mild beer.

Agaati is a place for fish, cooked Malyali style. And everybody seems to eat tuna. There are no tuna in the lagoon waters, but fishermen catch plenty in the surrounding sea. Tuna fried is how they serve it. Fish curry is not apparently in vogue on this island, though boiled rice is! We had noticed a number of mini goats on the island. A variety apparently brought up on little or no forage. So, back to Ahmed! That evening we spent a good two hours in the guesthouse kitchen, making and training the in house cooks on the finer points of north Indian mutton curry. And the goodly, mild coconut toddy swigged discretely at opportune moments.

Snorkelling is fun; once you learn to breathe through that tube and don’t panic when a little water gets into your mouth. After some practice in the shallows, we were taken to see the corals further out in the lagoon. This turned out to be the most fascinating and also the most heart-breaking experience of the trip. We slipped out of the boat gingerly, afraid of floating in the sea alone; so we held on to the boat for dear life and were now positioned over the corals beds. The crystal clear water allowed a spectacular view down to maybe twenty feet or more.

But we were looking at dead colonies. It was like witnessing sections of a huge city that abruptly and wantonly had life snuffed out of it. Like an underwater Hiroshima. Street after street of disconsolate devastation. From those ruined depths a haunting lament seemed to rise which only the mind can hear; a requiem for a lost civilization. Tiny shoals of dazzlingly coloured fish darted in and out of this dead city, searching frantically as it were for their multi-hued homes that now looked all the same and confused them. Or were these fish afraid of becoming colourless too? As our boat drifted on the surface, the tragedy below kept unfolding. “What have we done?”! “What have we done?”! The thought loudly knocked inside my head as we quietly lifted ourselves into the boat and headed back, silently and without answers.

Our flight back the next afternoon was cancelled. So we had our holiday gratuitously extended. We went back to the guesthouse and to the beach, snorkelled in the shallows, but did not mention the corals anymore.

Nodnat is a forester, but has not been a very good one. But he does love to travel and walk the talk. He joined the Indian Forest Service in 1976,  and is now retired and lives in Kasauli, Himachal Pradesh.